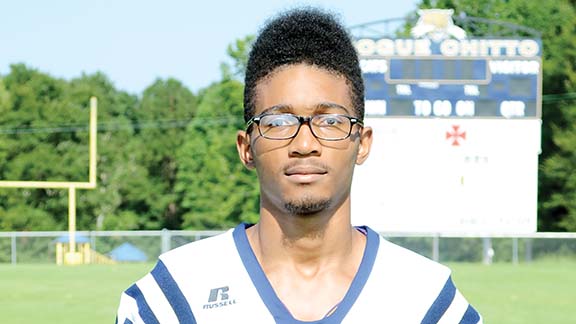 Bogue Chitto rising sophomore running back and defensive back Damarcus Godbolt has been named to the Primetime 23 for the first time. (Photo by Dylan Rubino)

It’s safe to say last season did not go the way the members of the team planned.

Godbolt knows that and believes both he and his team got stronger from the experience.

Going winless is something the players are using as motivation in order to never have that sense of disappointment again.

Godbolt stepped up in the offseason and became one of the more vocal players on the team not only on the practice field, but in the weight room as well.

“Not only has Damarcus been a leader on the field, but he’s more of a vocal leader as well,” Bogue Chitto head coach Gareth Sartin said. “He’s really stepped up this offseason and guys are looking up to him to lead the team. It’s been great to see.”

On the football field, Godbolt is a bruising running back that can run between the tackles. At defensive end, he’s a quick rusher that can get to the ball carrier. On the ground, Godbolt led the Bobcats with 209 yards on the ground and racked up 34 total tackles on defense.

His versatility on the field and his leadership skills put Godbolt in the Primetime 23, where he joins teammates Trey Nettles and Lafredrick Dillon.

“I feel pretty special about this,” Godbolt said. “I feel like we can step up to the plate big this year. Me, Trey and Lafredrick are the three best players on the team and I’m happy all of us made it. We’ve got a lot of great players in there that believe in us.”

Sartin said that Godbolt will be making the move to fullback on offense to have him run between the tackles and have rising junior Lafredrick Dillon be the main running back in the backfield.

The move for Godbolt on offense is one that hopefully will improve a rushing attack that only averaged 80 yards per game.

“Damarcus is a very physical football player so the move to fullback only makes sense for us,” Sartin said. “With him running between the tackles and Lafredrick on the outside, we can be a very good offense this season.”

“We’ve all worked hard in the offseason to get stronger and faster,” Godbolt said. “We got smarter and more mentally strong as well. It all comes with experience and I’m ready for it.”

What stung even more for the leader was going 0-6 in district play and not winning a game against Lincoln and Copiah County competition. The Bobcats fell to Loyd Star, Enterprise, Wesson and West Lincoln to start the 2016 season 0-4.

Godbolt and the leaders have made it clear that they want to win all of their games against local competition. They’ll get that chance with the other four local schools on the schedule for this coming season.

It’s a tall task, but the team feels like they can have a better season.

“We got a lot of young guys coming up and still have a lot of leaders on our team,” Godbolt said. “I think we’ll have a better season this year.”

Hugh Freeze’s fall from grace is a steep one

There have always been rumors surrounding former Ole Miss head football coach Hugh Freeze. Many speculations were tossed around during... read more