A Bogue Chitto man accused of shooting to death eight people will have a preliminary hearing Wednesday in Lincoln County.

Harbour was appointed Monday by Lincoln County Circuit Clerk Michael Taylor because Lincoln County Justice Court Judges Roger Martin and Joe Portrey recused themseves from hearing the case. No reason for the recusal was listed on their request to Taylor.

He was charged with one count of capital murder and seven counts of first degree murder.

The capital murder charge is for the death of deputy William Durr, 36. The first degree murder charges are for the deaths of Barbara Mitchel, 55, her daughter, Tocarra May, 35, and Mitchell’s sister Brenda May, 53, all of Bogue Chitto; Austin Edwards, 11, and his cousin, Jordan Blackwell, 17, of Brookhaven; Ferral Burage, 45, and Sheila Burage, 46, of Brookhaven.

Martin, who preceded over that appearance, denied bond for Godbolt. He has been housed since his arrest May 28 in an undisclosed location.

According to the Lincoln County Justice Court office, if Harbour determines there is probable cause, the case will then go to a Lincoln County grand jury and District Attorney Dee Bates’ office will take over the case there.

If found guilty, Godbolt could face the death penalty or life without parole for the capital murder charge. First degree murder can carry a penalty of life in prison with the eligibility of parole.

This will be a Justice Court hearing, though it will be held in the Circuit Court courtroom.

The hearing was moved to the courthouse to allow for more room. The courtroom seats about 80 people. 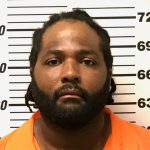