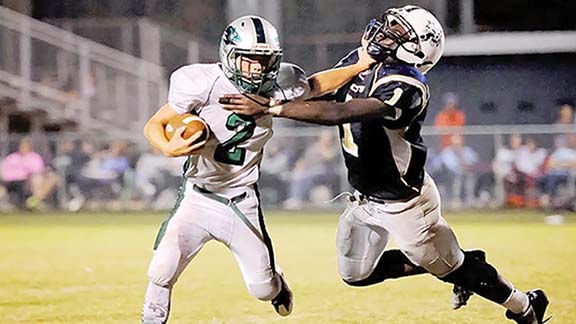 The Primetime 23 recognizes the best 23 football players for the 2017 football season in the area. This is the final selection.

Ever since he was young, West Lincoln rising senior Brandon Smith knew he wanted to play football.

Smith always remembers playing football in the backyard with his siblings and his father. At the age of 6, Smith recalls that he was running around freely on the grass and tossing the football, not having a care in the world.

It was a feeling of destiny for Smith and he knew from those days in the backyard that football was meant for him.

“I knew ever since I was little that football was for me. The game fit me as a person and a competitor,” Smith said. “I love running around and tackling people and making plays with the football in my hands. I don’t know what to say. I just love football.”

On the football field for West Lincoln, Smith can do it all.

On offense, Smith can run and the catch the ball out of the backfield. On defense, the 5-foot-6 Smith flies around and plays with a ball-hawking mentality that his teammates gravitate to.

The rising senior admitted that he has no idea what position he’s going to play this coming season. Last year during his junior campaign, he played slot back on offense, defensive back and some reps at linebacker.

“He’s the ultimate high school football guy,” Smithhart said. “It doesn’t matter how big he is. He’s got a big heart, he plays hard and because of that, all the guys respect him and I’ve noticed that the short time I’ve been here.”

For his do-it-all abilities on both sides of the football, Brandon Smith has been named to the Primetime 23.

“It feels really good to make the Primetime 23,” Smith said. “It feels good knowing that I worked hard to make it to this point.”

It was a rocky season for West Lincoln in 2016 with the team finishing 2-8 overall with wins over Lincoln County foes Bogue Chitto and Enterprise.

The lowest point of last season for Smith came in their final game against Loyd Star, where the team lost 56-14.

“That game, we just went into it hot-headed and we didn’t really execute right to win the game,” Smith said. “We were a good matchup against them, but we just weren’t ready.”

With how last season ended, the sting of the Loyd Star games still lives with the leaders on the team.

With coach Smithhart coming into the picture, a new culture was brought to West Lincoln and Smith noticed a difference right from the start.

“It’s way different from last year. We all want it so bad,” Smith said. “Practices are a lot more intense, especially in the weight room. I think coach Smithhart has gotten everyone ready.”

The new head coach has pushed the players to their limits this summer and Smith has noticed the team grow from it.

The offseason for Smith has consisted of working on his foot speed, agility and becoming stronger.

“I’ve spent most of my free time and practice time working on all of those things,” Smith said. “I just want to be faster and work on getting to the ball quicker and making people miss when I have it.”

“We know he has to be on the field, but we just don’t really know where yet,” Smithhart said. “He’s one of those players that says he’ll do whatever it takes. We’re just looking for different spots for him. Once we get him into the season, we’ll see where we can fit him best at.”

With a new regime coming into West Lincoln, Smith feels like the expectations have changed and that’s a good thing.

“I really think we can make it to the playoffs,” Smith said. “If everybody can keep their head on right, and I know we can, we can absolutely do it.”