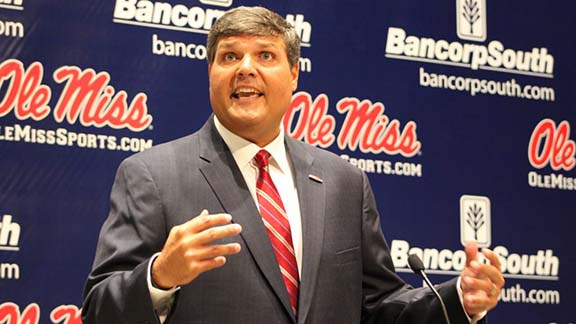 “I can truly tell you all today that this is my dream job,” Luke said. “It’s a job I’ve been preparing for my whole life.”

While Luke inherits a job he’s been thinking about since he was a little kid watching the Rebels play on the field, he takes over a less than ideal situation.

Ever since the start of the 2016 football season, the Ole Miss football program has hit rock bottom.

Where you start with the Rebels. Do you go with the 5-7 season? The self-imposed bowl ban for the upcoming season? An ongoing NCAA investigation? The dismissal of Hugh Freeze under less than ideal situations?

It seems as if a dark cloud has hovered over Oxford since their Sugar Bowl victory over Oklahoma State on Jan. 1, 2016.

The season started to look good in their opener against Florida State in Orlando, but Ole Miss blew a 28-13 lead at halftime and the season crumbled from there.

Luke knows the unfortunate circumstances his beloved Rebels are under and feels confident in himself and his players to get the job done.

“They want to go out, represent Ole Miss and win football games,” Luke said. “It’s my job to make sure the focus stays on the players.”

To many people around the University of Mississippi and Ole Miss athletics, the Luke family is considered red and blue royalty.

The Gulfport native and the rest of the Luke family made countless trips up to Oxford  to watch his father and his older brother, Tom Luke, play football for the Rebels.

As a freshman for Ole Miss in 1995, Luke walked on to the football team and started right away at the center position on the Ole Miss offensive line. Ever since his first year in Oxford, Luke was the glue that kept the offensive line together.

Ever since he was born, Luke has bled red and blue and that will be tested more than ever this coming football season.

“It is time,” Luke said. “It’s time for Ole Miss and Rebel Nation to move forward together. I am honored to be the head coach at Ole Miss.”

Will Luke get the interim tag removed and become the permanent head coach at Ole Miss? That remains to be seen, but the task is daunting.

The good news for Luke is that he has little or close to no involvement in the NCAA investigation. Luke’s name is only mentioned in one of the 21 NCAA allegations.

As the offensive line coach under Freeze, Luke has built up a once struggling unit and turned them into a position of strength for the Rebels in 2017.

As an offensive minded coach, Luke should have an easy time transitioning into the role of head coach with quarterback Shea Patterson under center. With sophomore Greg Little and junior Javon Patterson leading the charge at offensive line and depth at the wide receiver position, the offense should put up big numbers and light up the scoreboard.

Defensively is where the Rebels have the most question marks.

With defensive coordinator Wesley McGriff being bumped up to associate head coach, a struggling defense has been placed in good hands.

“We’re here because of these student athletes, so I immediately got over that and focused on the players and just understood that we have to keep them intact,” McGriff said.

Luke displayed raw emotions when giving out his opening address. His feeling towards his alma mater is real and it resulted in the new head coach fighting back tears.

His opening address said more than anything else.

He may not be named the permanent head coach after this season, but his love and passion for Ole Miss is unparalleled.

Don’t ever doubt that.

Dylan Rubino is the sports editor at The Daily Leader. He can be reached at dylan.rubino@dailyleader.com

The Primetime 23 recognizes the best 23 football players for the 2017 football season in the area. This is the... read more