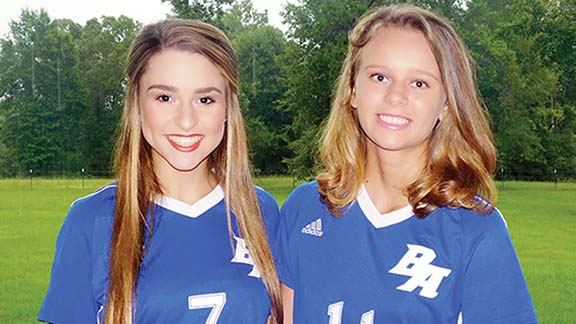 Madalyn Oglesby (left) and Kaitlyn Bass (right) of Brookhaven Academy are the two senior captains that will lead the lady Cougars soccer team on the field this fall. (Photo submitted)

The 10-team soccer tournament will be held at the Hansel King Sports Complex in Brookhaven.

Leading the Lady Cougars on the field in 2017 will be its two senior captains in Madalyn Oglesby and Kaitlyn Bass. Both Oglesby and Bass have been starting midfielders for Brookhaven Academy since their sophomore year.

The Lady Cougars graduated eight seniors from last year’s team and this year they will be relying on a few experienced players to mesh with a large group of new players.

“We are really looking forward to this year’s tournament,” Brookhaven Academy head coach Mark LeBlanc said. “With 10 new players on our roster, most of which have never played soccer, we had to focus mostly on fundamentals in our summer practices. The tournament allows us to play three or four games and give our girls some valuable game type experience to prepare for the upcoming season.”

This is the second year that Brookhaven Academy has hosted the event. Last year, the eight-team event was a huge success. The amount of success allowed the kickoff classic to expand to 10 teams this year.

“We are going to continue to make this tournament an annual event. This is an opportunity to showcase some of the regional girls soccer talent,” LeBlanc said. “The feedback was positive from all of the teams that played last year, mostly because there has not been a venue this large for which the girls teams can participate.”

General admission to the tournament Saturday is $6 for adults and $2 for children and students. Admission on Friday is free of charge. There will be full concessions on Saturday.