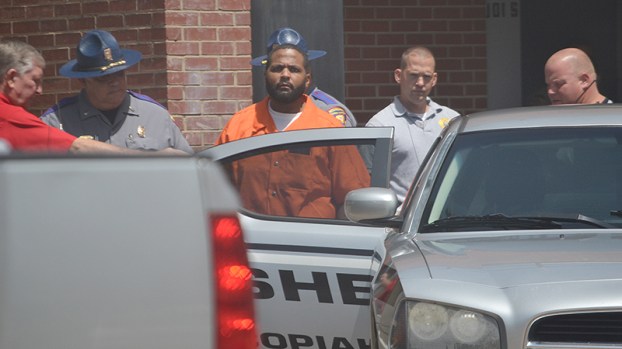 Photo by Donna Campbell/Accused killer Willie Cory Godbolt, of Bogue Chitto, leaves the Lincoln County jail today after a justice court judge found enough evidence for the case to be bound over to a Lincoln County bound jury.

Godbolt bound over to a grand jury

A Pike County justice court judge today found there was enough evidence against murder suspect Willie Cory Godbolt for the Bogue Chitto man to be bound over to a Lincoln County grand jury.

Godbolt, 35, went before Judge Bryan Harbour in Lincoln County Circuit Court, although the case is still in justice court. The courtroom in the Lincoln County Government Complex was used to allow more space for the eight victims’ families to attend. The courtroom, which seats about 80, was full with law enforcement officers lining the three walls.

Harbour heard from lawyers and one witness to determine if there was probable cause for Godbolt to be bound over to the grand jury. The hearing took less than 15 minutes.

Harbour was appointed Monday by Lincoln County Circuit Clerk Michael Taylor because Lincoln County Justice Court Judges Roger Martin and Joe Portrey recused themseves from hearing the case. No reason for the recusal was listed on their request to Taylor.

He was charged with one count of capital murder and seven counts of first degree murder.

The capital murder charge is for the death of deputy William Durr, 36. The first degree murder charges are for the deaths of Barbara Mitchel, 55, her daughter, Tocarra May, 35, and Mitchell’s sister Brenda May, 53, all of Bogue Chitto; Austin Edwards, 11, and his cousin, Jordan Blackwell, 17, of Brookhaven; Ferral Burage, 45, and Sheila Burage, 46, of Brookhaven.

Martin, who preceded over that appearance, denied bond for Godbolt. He has been housed since his arrest May 28 in an undisclosed location.

If found guilty, Godbolt could face the death penalty or life without parole for the capital murder charge. First degree murder can carry a penalty of life in prison with the eligibility of parole.

Moments after he was arrested May 28, a handcuffed Godbolt told a reporter from The Clarion-Ledger, on video, that someone in the first house called law enforcement while he was talking to his wife and in-laws about his wish to take his children home.

“My pain wasn’t designed for him. He was just there,” Godbolt said of the deputy.

Godbolt also said in the video: “My intentions was to have God kill me. I ran out of bullets. Suicide by cop was my intention. I ain’t fit to live, not after what I done.”

Storm dumps nearly a foot of rain on Lincoln County