Youngsters ready to ride the popular kiddie cars at the Exchange Club Fair today are in for a surprise.

The 75-year-old cars made of cast aluminum are sleek and shiny, thanks to a lot of elbow grease and good intentions.

“I think they’re going to think it’s fantastic,” said fair chairman Steve Smith. “They have a real car finish. All bright colors. In my opinion, the kids are going to love them. It’s practically a new ride.

The fair is open today from 6-10 p.m. at Exchange Club Park. It will be open Friday and Saturday 6-10 p.m. as well. It will enjoy a second weekend run Aug. 3-5 with the same hours. A fireworks finale will close the fair.

Parking and admission is free, but there is a charge for food, games and rides. A $10 bracelet can be purchased each night for unlimited rides.

The kiddie car project was a collaboration between several volunteers including painters at Smith Brothers and GT Collision, Smith said.

Jon Thames, co-owner of GT Collision, heard that someone at Smith Brothers was painting some cars and asked how he could get involved. Although he’s not a member, he wanted to help the Brookhaven service organization.

“The Exchange Club doesn’t get enough credit for what they do,” he said.

Some of the money earned from the fair is used to maintain the Exchange Club Park, but the rest goes to the community through scholarships and donations to other groups.

Club President Jeremy Brown brought him five cars to paint. That’s when he had the idea to sell sponsorships for the cars at $500 a pop. He raised $3,500 which he donated to the Exchange Club.

He painted the cars using the sponsors’ colors and logos. His idea was a hit.

“I’ve got so many people wanting to get on board now, if I had 100 cars I could have sold all of them,” Thames said.

He said some of the cars were actually fire trucks at one time and needed to be remodeled where the ladders had been attached. He welded new aluminum to some of them before painting them. He took possession of the cars when the fair closed last year, but really stepped up his work on them in the last few months. He’s spent about four months of Saturdays and all of his free time on the labor of love.

“I enjoyed doing them but I’m proud to be done,” he said. 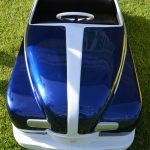 Photo by Scott Boyd/Jon Thames of GT Collision in Brookhaven restored several kiddie cars for the Brookhaven Exchange Club in preparation for this week’s annual Fair. The cars that have been part of the Exchange Club Park amusements since the late 1940s.