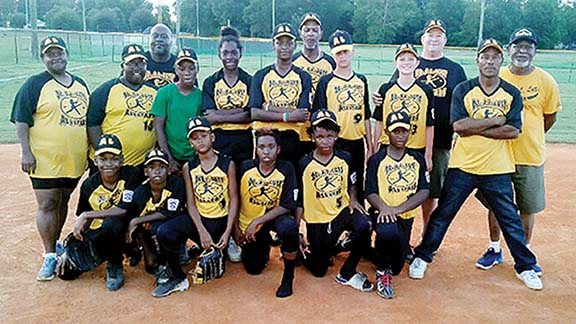 This was the third time the age group has played in the state tournament as the team completed its third year as a charted program.

The Major League All-Stars fell short of a state title and lost in the championship game to Starkville, a team that has won the state title for three years in a row.

The team advanced to the championship by taking down Hattiesburg and Jones to reach the title against Starkville.

Kaja Willis hit three home runs against Hattiesburg, the only home run the team had in the state tournament.

The A.L. Lott team could not hang with the dominant team from Starkville and fell by a score of 14-3.

All of the coaches agreed the team was complete in all three phases of the game: hitting, pitching and defense. They just ran into a better team at the wrong time.

All of the coaches were proud of the team effort with the little time they had to practice and prepare for the tournament.

“I am so pleased with both our guys and our girls this year,” head coach Kermit Sartin said.

“Starkville has been a thorn in our side the last three years,” program director Roy Smith said. “I stressed to the team before we left it did not matter whether we win or lose. I only wanted them to play hard, play their best and to have fun. I couldn’t have asked for anything more.”

In the last three tournaments, the Dr. A.L. Lott Major League 11-12 team advanced from last place to second place in the state. The progression the team has made over the years shows that they are building something special in state competition and one day hope to be recognized on the national level.

It was a once in a lifetime opportunity for many of the players on the team and one that they will never forget.

The Copiah Academy Colonels and head coach Paul Anderson have a tough task at hand by replacing star running back... read more