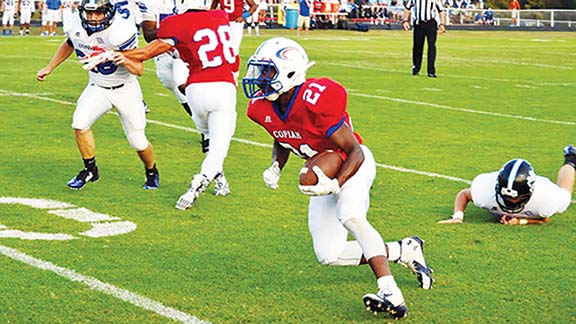 Running back Miquell Powell of Copiah Academy (21) runs the ball down the sidelines in a game played last season. (Photo courtesy of Copiah County Courier)

The Copiah Academy Colonels and head coach Paul Anderson have a tough task at hand by replacing star running back Landon Murphy.

Anderson remembers when Murphy took over the reins at running back his sophomore year, broke his thumb on his right hand and played the rest of the season with a cast on. Murphy proceeded to rush for over 1,000 yards that year and 2,532 yards his junior year in 2015.

Murphy followed up his junior year with 2,120 all-purpose yards his senior year in 2016 with 23 rushing touchdowns.

This will be the first year without Murphy running the rock for the Colonels and Anderson knows you can’t just simply replace a player of Murphy’s caliber.

“Landon was probably one of the best warriors we’ve had at Copiah Academy in a long time,” Anderson said. “We’re going to miss him this year not only because he’s a transcendent player, but just a great kid as well. He was the lifeblood of the team and we fed off his momentum.”

There won’t be another player like Murphy coming to Copiah Academy again, but Anderson is confident in his team to fill in his place and do their job.

“We’re going to do it mostly by committee this season with the talented guys we have,” Anderson said. “They won’t be able to single one guy out in our offense this season. We have a great group of guys that can come out and do a good job of running the football. We’re going to be a little more multiple.”

When the 2016 playoffs started, teams started locking in on Murphy. In their playoff opener win versus Parklane Academy, they held the star running back to only 57 yards on 22 carries. The Colonels fell in the next round to Madison-Ridgeland Academy 49-24. They held Murphy to 30 yards rushing on 14 carries.

It was the second year in a row the Colonels lost to Madison-Ridgeland in the playoffs.

“I felt we were mismatched at the skill positions that game,” Anderson said. “We just couldn’t knock the door down these past two years. The guys expect to compete and they expect to win a championship. It’s been great to see.”

The Colonels have to replace their starting quarterback and leading receiver from last season as well. Anderson said rising senior Dalton Hayles would get the starting nod under center. Hayles is more of a running threat at the quarterback position with 72 carries, 426 yards and four touchdowns on the ground last season.

Anderson will look at rising seniors Nick Greenlee and Connor Jones to get the majority of the snaps at running back with Murphy gone, but other players will step in and get carries as well.

“(Nick) Greenlee and Connor (Jones) played valuable snaps for us at running back last season,” Anderson said. “Those are experienced kids I can look up to. With all the guys we’re throwing out at running back, we’re going to be so multiple and teams will have a hard time seeing what’s coming.”

“Connor is one of those guys that always works hard and takes care of his body. It’s 100 percent all of the time,” Anderson said. “You can depend on him and trust him with anything.”

Rising senior Caston Granger will be the lead receiver for the offense. Granger finished last season with 11 catches for 172 yards and two touchdowns.

Another player Anderson is looking forward to stepping up is rising senior Logan Thompson, who finished last season with 30 total tackles.

“For us to be good defensively, we have these guys coming in have to step up and they have to come together as a group,” Anderson said. “Those guys have had a great summer and they just need to keep on working hard.”

With the offensive line returning and talented players ready to come in and play, the expectations remain the same and Copiah Academy is ready for another run.

“The guys have had the best summer I’ve ever seen,” Anderson said. “We need to just take it one game at a time. We want to make sure we’re concentrating on the right goals and we have to be ready.”

Enterprise coming together for 2017 season

A win over Ethel followed by a 14-6 victory over Lincoln County rival Bogue Chitto got the Enterprise Yellow Jackets... read more