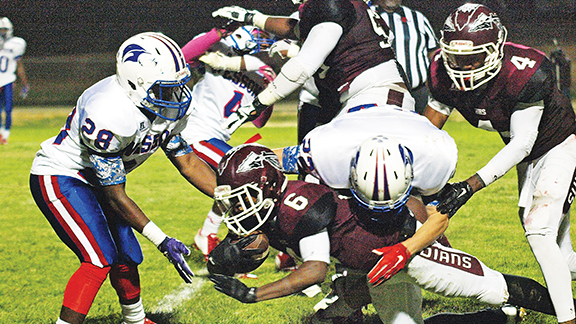 Malik Gray of Hazlehurst (6) dives for the first down in their win over Wesson last season. (File photo)

Hazlehurst more motivated than ever

Another magical season for the Hazlehurst Indians came to a disappointing end in 2016.

Hazlehurst blew past the competition in the regular season and went an undefeated 10-0 heading into the playoffs. After a 40-7 win over Perry Central in the opening round and a 40-0 win over Forest in the second round, the Indians looked like world-beaters.

That run cam to an end against Raleigh in the next round after giving up 30 points in the first quarter and falling by a score of 42-22.

The dream season came to a sudden end and the team was mad. That pain still lives with the players and the coaching staff to this day.

“We’ve been working out and getting better ever since that loss to Raleigh,” Hazlehurst head coach Todd McDaniel said. “Hopefully that’s been fueling our fire. The guys have really been pushing each other this summer and hopefully we can advance further as a result of that.”

The expectations always remain the same for coach McDaniel and the Indians, but with the majority of the roster coming back, the team expects to make an even deeper run in 2017.

“We’ve gotten on track quick this offseason and have gotten faster,” McDaniel said. “We’re young and old in some spots and that’s the price you have to pay with moving on from such great players. If we play our A-game, we will come out on top. We just want to make sure last season doesn’t happen ever again.”

A big part of the Hazlehurst offense centers around a core offensive line and a strong rushing attack. That combination got the Indians four 1,000-yard rushers last season and struck fear in opponents when running the rock.

Under center, Stewart threw for 848 yards, 12 touchdowns and five interceptions. On the ground, Stewart rushed for 1,111 yards and 12 more scores. Craft led the team in rushing last season with 1,306 yards and 12 touchdowns with Steward following up with 1,175 yards and a team-high 16 rushing touchdowns.

McDaniel knows what his two running backs can do, but he believes the play of his quarterback will be key for his team’s success.

“I believe that our quarterback is one of the best in 3A football,” McDaniel said when talking about Stewart. “We need 2,000 passing yards from him this season. Even if we can get 1,500 form him, that would be great.”

Not only does Tim Steward return as a productive rusher on offense, but he also returns as the leading tackler from last season with 171 total tackles.

“I believe Tim is as good of a linebacker and a fullback that we’ve had in the past,” McDaniel said. “He plays with such physical and brute strength and that’s what we need from him this coming season.”

“Both those kids have great acceleration and explosion,” McDaniel said. “They need to come in right away and be big time players for us and I think they can.”

After the playoff loss to Raleigh last season, the players knew that result could never happen. The coaching staff believes the players are more motivated now than they ever have been.

We’ll just have to wait and see how the product turns out on the football field.

“The goal every season is to make a deep run in the playoffs and win a state championship,” McDaniel said. “The guys just want to get on the field and play. I’m looking forward to that as well.”