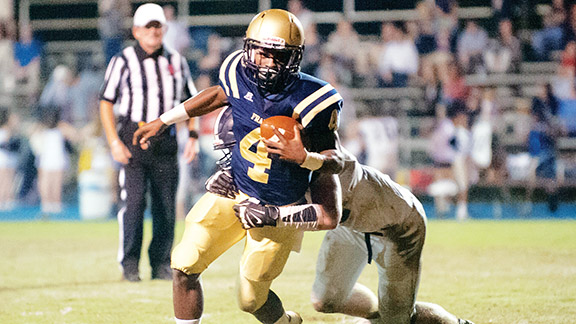 The 2016 football season was a roller coaster ride for the Franklin County Bulldogs.

The Bulldogs started off losing their first two games of the season, then proceeded to win their next two games.

Franklin County hit a rough patch and lost their next three games to fall to 2-5 overall. With their backs against the wall, the team responded to adversity with three victories in a row to advance to the playoffs at 5-5 overall.

The Bulldogs suffered a disappointing 49-21 loss to Seminary in the opening round of the 3A state playoffs, but head coach Trey Woodard knows his team’s consistency level needed to change.

After an 8-5 season in 2015, including a playoff victory, the players and coaches knew they disappointed in 2016 and hope to learn from last season to be better this fall.

“We know we didn’t live up to those expectations as players and coaches last season,” Woodard said. “We as coaches have to be better and the players know they have to be more consistent in their approach. We have to live up to our winning standard.”

It’ll be a new look offense this season for the Bulldogs with starting quarterback and leading rusher De’matre Collins moving on.

A bigger burden will be placed on rising senior running back Keonte’ Bee to step and make the most of his opportunities.  Bee finished the 2016 season with 740 yards on 148 carries with six rushing touchdowns. Bee also reeled in 114 yards receiving and one touchdown catch.

It won’t be just Bee in the backfield for Franklin County, and Woodard is excited for multiple guys to step up running the ball.

“We’ve got multiple guys that will step up. No one player will replace the work of our lead guys,” Woodard said. “We’ll make sure to divide the workload up evenly.”

A big part of the Franklin County football team last season was Dominique White, who returns for his senior season. White led the Bulldog defense with 106 total tackles and averaged nine tackles per game in 2016.

White is the vocal leader on the team and needs to expand on his leadership role in order to Bulldogs to change their fortunes in 2017.

“Dominique will do more of the same for us this season, if not better. We expect great things form him,” Woodard said. “We have a great defense and we have great talent returning. We have a lot of guys that are two-or-three year starters for us and we’re going to use that to our advantage.”

Those two-and-three year starters will be leaned upon to push the Bulldogs further this season with a new look offense.

Led by an experienced defense and talented skill players on offense, Franklin County has the ingredients to make a run in the playoffs.

“We’re not going to set up any long-term goals and we’ll just play it game by game,” Woodard said. “We have to play up to our potential. We’re only worried about the next play and being consistent.”

The start of the 2017 softball season marks year four for Becky Flowers at Brookhaven Academy and the confidence is... read more