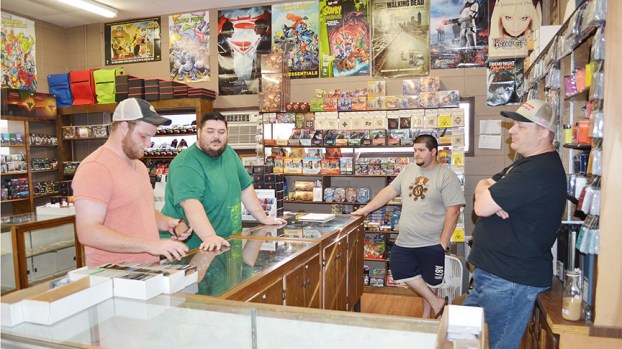 Photo by Matt Rushing/Hero’s Haven in Brookhaven has unique comics, games and collectibles not found anywhere else in the city. Pictured are, from left: Daniel Friis, James Bardwell, Ty Smith and co-owner Charles Morris.

Unique Brookhaven store is a haven for gamers

“This is a place that I thought of many years ago,” said Charles Morris, manager and part owner of Hero’s Haven. “The Brookhaven area has always had something for athletes to do, but if you’re not athletic or if you’re not a social butterfly, there has always been a big gap for those individuals.”

Morris said some individuals stay home and play video games and avoid people. His vision in opening this place was to get those particular people out and let them socialize in a safe environment where they can do something that utilizes their particular skills.

“Knowing that there are kids out there sitting in their house because they may not have had any friends, or the friends they did have were also not social, this provides a place for them to come and play games and socialize with each other,” Morris said.

He found someone with the same idea and Hero’s Haven was born.

“I just got lucky enough to meet up with someone that was willing to invest in it and here we are,” Morris said. “Comics and games are our primary mission.”

The store is nearing its two-year anniversary in November.

They host various promotional events during the week such as Magic Taco Tuesday and card tournament games throughout the week.

On Magic Taco Tuesdays, they play a game called Magic the Gathering and the winner gets a $10 gift card to Taco Bell.

“A lot of people in Brookhaven aren’t aware of the type of games we play. For example, Magic the Gathering is a game that is played in over 200 countries. It’s pretty big worldwide,” Morris said. “There’s a pro tour where people make millions of dollars.”

Morris said they also have a big Dungeons & Dragons following. D&D is a popular role-playing game.

The store is open Tuesday through Saturday from 2 p.m. to 10 p.m. They usually start games at 6 p.m. Spectators are welcome.

“I love seeing the kid that walks in the door and they’re too shy to say hello and after a few weeks of coming back they come out of their shell and become a completely different person,” Morris said. “I’ve seen so many kids walk in this place, who probably spent weeks working up the nerve to even walk in and month later they have friends. They look forward to coming here and they’re able to talk to new people. That’s what this place is about for me.”

Kirstie Campbell Newman can’t imagine living anywhere other than Brookhaven. Although she was born in Nashville, Newman has lived here... read more