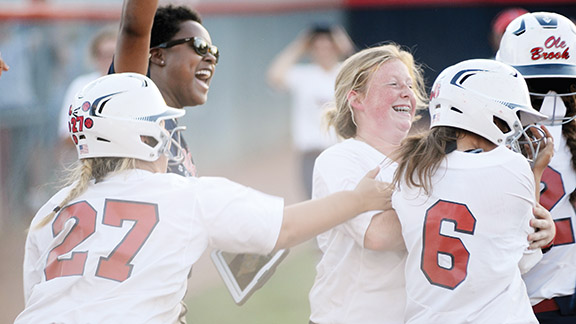 The Ole Brook softball team celebrates a walk-off victory during a game in the spring. (Photo by Dylan Rubino)

It was a roller coaster fast pitch softball season this past spring for the Brookhaven Lady Panthers.

The 2017 fast pitch team went through it all— from the tragic death of former teammate Brittney Hill to a run in the 5A state playoffs, resulting in a second round loss to Long Beach in three games.

The Lady Panthers are battle-tested, but the team is forced to move on from seniors Macy Ziskin, Tia Bussey, Jada Henderson and Cheyenne Motley. Each senior left a profound impact on the team and it’ll be a big task to replace those great players for BHS.

“We have a lot of positions to fill with losing four senior starters from last season,” Brookhaven head coach Mandy Vinson said. “I expect the younger players to really step up and be big for us this year.”

The 2017 slow pitch season starts Saturday with the Lady Panthers making the trip to Monticello to face Lawrence County in a Jamboree game.

The regular season officially starts Aug.  12 on the road at Warren Central.

Brookhaven went 1-3 combined against the two schools during the fast pitch season with their only win coming against Warren Central back in February.

Slow pitch softball is a new opportunity and a new season for the Lady Panthers and there’s plenty of players that can step up and shine during the new school year.

Seniors Jadeyn Fuller and Rileigh Allen will be the two leaders for the Lady Panthers this season.

“Jadeyn will probably step in and play second base for us while Kat Wallace moves to shortstop to fill the position,” Vinson said. “Rileigh Allen will split time between first base and pitching.”

As the ace of the pitching rotation, Fuller was outstanding on the mound during the fast pitch season with a 13-7 overall record, 2.91 ERA and 10 complete games to show for it. Fuller also had 14 RBIs at the plate.

Allen will step in and be one of the pitchers this slow pitch season. Allen batted .160 in the spring with eight RBIs and seven runs scored.

Wallace will have a bigger role this slow pitch season after a stellar 2017 in fast pitch. The junior batted .382 with 35 runs scored and 26 RBIs as well.

Sophomore Madi Miller is another big name returning to the starting lineup for Ole Brook. Miller batted .258 during the fast pitch season with 30 runs scored and 23 hits.

“As a sophomore, she’ll be the veteran in the outfield,” Vinson said. “She will play left-center for us and have a big impact.”

Other returning players to the starting lineup for the Lady Panthers are Meg Foster and Kyla Henderson.

“Those two will be big batters for us in the lineup,” Vinson said.

One name Vinson said to look out for this fall is freshman CeAira Henderson, who will be a big help in the pitching rotation for Vinson and the Lady Panthers.

There’s been plenty of time to gel over the summer for coach Vinson and her team. The team has gone through summer workouts and training programs in order to get ready for a new season.

There are plenty of new faces with this year’s team, but the Lady Panthers feel they have the team to get over the hump.

“I’m really excited about this team,” Vinson said. “We have had summer workouts all summer. The girls have worked extremely hard and have had great attitudes.”