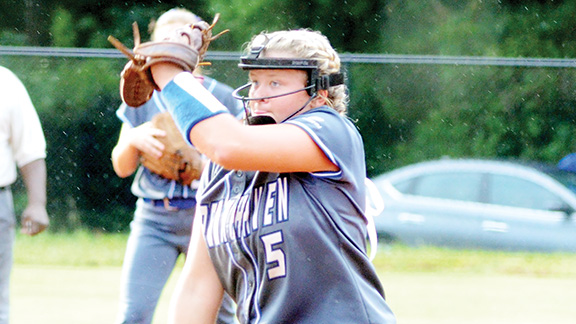 Brookhaven Academy softball off to 2-0 start

The Brookhaven Academy Lady Cougars got off to a flying start the first week of the season with a 2-0 record.

The Lady Cougars kicked off the 2017 season with a road win Monday night at Central Private and won by a score of 13-2. Brookhaven Academy then played their first home game of the season Tuesday night and cruised early to a 9-3 win.

“I’m so proud of the effort in both wins,” Brookhaven Academy head coach Becky Flowers said. “We had a few moments of adversity in the Cathedral game and we could have rolled over, but instead we rose above it and conquered it.”

Behind a four-hit performance from Lady Cougar K.K. Jordan, the Brookhaven Academy offense cruised early and moved on to win by a score of 13-2.

Jordan led the attack at the plate with three singles, one double and four runs scored to help put the game out of reach.

Watson, Case and Smith drove in three runs each to lead the scoring attack. The three players also combined for nine of the 16 hits on the night.

Smith got the start on the mound for Brookhaven Academy and pitched six innings, giving up two runs (none earned) on four hits, five walks and three strikeouts.

Julie Anna Bartman went 3-for-5 from the plate with two runs scored and Madison Moak went 1-for-5 with one RBI and one run scored to round out the hitting total for Brookhaven Academy.

Central Private only had four hits and two runs on the night.

The Lady Cougars jumped on the scoreboard late and hung on to move to 2-0 on the season and defeated Cathedral by a score of 9-3.

“We struggled a little offensively in the early innings, but made our adjustments,” Flowers said. “We used our speed to put some pressure on their defense and fortunately, got a few breaks and came away with the win.”

Singles by Madi Smith, Emily Claire Felder and Madison Moak helped the Lady Cougars put up four runs in the bottom of the fifth inning.

A two-RBI single from Madison Thompson and an RBI groundout from Makayla Martin helped extend the BA lead to secure the win at 9-3.

Smith picked up another win on the mound for the Lady Cougars, pitching seven innings and giving up three runs (none earned) on five hits, two walks six strikeouts.

“Madi has pitched efficiently and effectively the last two games,” Flowers said. “We had 25 hits to support her, so it’s a total team effort.”

Next up for the Lady Cougars is a matchup against Columbia Academy tomorrow at home. Junior varsity first pitch is set for 5 p.m. with varsity following at 6:30 p.m.

Not every high school football player has the chance to play college football, let alone at the Division I level.... read more