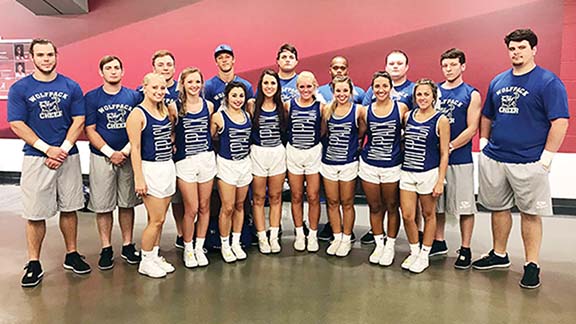 TUSCALOOSA, Ala. — The Copiah-Lincoln Community College cheerleaders had a successful camp on the campus of the University of Alabama this past weekend as the squad brought home all superior ribbons.

“Our group grew as a team over the weekend,” said Co-Lin cheer coach Micah Allen. “The squad was selfless and worked together as one unit and it resulted in a successful camp.”

Co-Lin’s mascots also received the prestigious Most Collegiate award, which is chosen between all schools that attend the camp.

“We are very proud of the hard work our mascots put in,” said Allen. “Being that we attend the camp with many SEC schools and other universities makes us elated to have received this award.”

Look for Co-Lin’s cheer squad at all 2017 football games and home basketball games. Meet the 2017 squad at Meet the Wolves on Wednesday, Aug. 30, in Stone Stadium at 7 p.m.

Brookhaven Academy softball off to 2-0 start

The Brookhaven Academy Lady Cougars got off to a flying start the first week of the season with a 2-0... read more