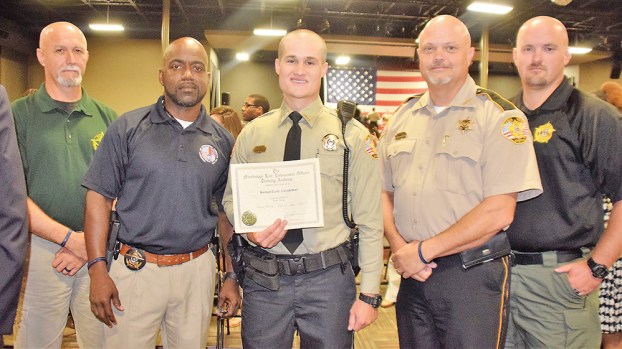 A Lincoln County Sheriff’s deputy has been named the highest overall graduate at the Mississippi Law Enforcement Training Academy’s most recent class.

Deputy Luke Henderson, of Wesson, finished first out of 51 recruits who graduated Wednesday.

“We had a lot of great recruits there. I told everyone that came up congratulating me that I was just as surprised as they were,” said Henderson, 25. “I just went in striving to do my best and complete the training.”

Recruits are ranked by combined averages in fitness, firearms and academic tests. Class 255 started with 69 recruits from across the state. They finished with 51 graduates.

Henderson was also named top shot after scoring the highest in firearms qualifications.

“My grandfather, James Smith, had a lot to do with that. He’s been teaching me how to shoot since I was very young. We spent hours and days on the range. I’ve been around guns and ammo for quite a while,” said Henderson.

The toughest part for Henderson was being away from his wife, Mary, and kids — Victoria, 4, Lydia, 2, and 5-month-old Grace.

“I started on May 14 and just finished Wednesday. Every week from Sunday to Thursday you have no contact with the outside world,” Henderson said. “That was very difficult, but I’m glad I made it through.”

According to Sheriff Steve Rushing, Henderson is the first officer from the Lincoln County Sheriff’s Office to receive an award at the graduation ceremony.

“We’re so proud of him. I’m really proud of him making top of his class,” Rushing said. “He’s a great person and he brings another positive aspect to our department that will represent Lincoln County well.”

Originally, Henderson had plans to join the military, but asthma prevented him from being able to serve in the armed forces. So instead, he had a vision of serving the local community. His father served in the Mississippi Highway Patrol as a trooper for 23 years.

“When I was a teenager, my goal was to join the military. After that didn’t happen I had to change my goals. I wanted to get into law enforcement,” Henderson said.

He graduated from Mississippi College with a degree in criminal justice and waited for the right opportunity.

“I really wanted to make sure I joined the right agency,” said Henderson.

He was hired by the Lincoln County Sheriff’s Department on April 1. He has been with a training officer since he joined the department. After graduating the academy, he looks forward to serving the people of Lincoln County.

“Law enforcement is extremely necessary for our society to function correctly. I believe that I’m doing an important job and I don’t take that responsibility lightly. How I approached the academy is how I will approach my job. I will give the people of Lincoln County my best every day on the job.”

Today is the first day of class for students in city, county and private schools and while most students are... read more