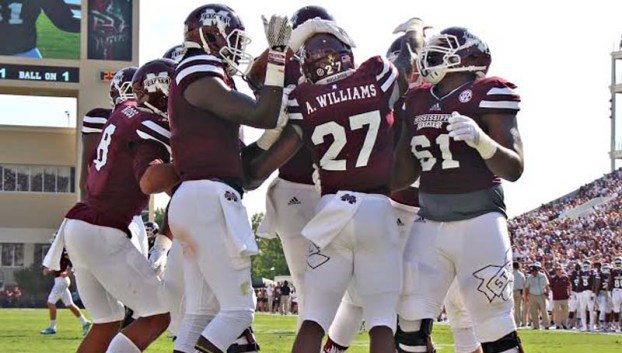 Walter Frazier / For The Vicksburg Post / Mississippi State running back Aeris Williams (27) celebrates with his teammates after scoring on a 1-yard run in the first quarter Saturday against Northwestern State.

Plenty of unknowns with football in Mississippi

In a tumultuous offseason filled with drama, surprises and plenty of preseason hype, the 2017 college football season is just under a month away and I simply can’t wait.

With fall camp kicking off this week, talking season is closer to ending and it will soon be time to strap on the pads, slide the jersey on and take the field to hit somebody other than your own teammates.

The preseason coaches poll came out Thursday and to no surprise, the Alabama Crimson Tide sits atop at number one. Ohio State, Florida State, Southern California and defending national champions Clemson fill out the rest of the top five.

What does the release of the coaches’ poll mean? Absolutely nothing.

However, it is a chance to see where each team stacks up in the rankings and gives a preview to week one of the season and which games you should highlight on your TV schedule.

As it stands right now, we could have the game of the year opening weekend in Atlanta when Alabama and Florida State square off in a potential top three matchup.

There are six teams from the Southeastern Conference in the preseason top 25, including Alabama, LSU, Auburn, Georgia, Florida and Tennessee.

When looking at the coaches’ poll, you will notice that there are no teams from Mississippi in the top 25.

To every fan of college football, that is no surprise with middle of the pack seasons from Mississippi State and Southern Miss.

Let’s not even mention the disastrous 2016 season Ole Miss had.

The Mississippi State Bulldogs received 19 votes in the preseason coaches’ poll, but it wasn’t enough to rise into the top 25.

The Bulldogs have received a lot of positive preseason buzz thanks to junior starting quarterback Nick Fitzgerald. Fitzgerald had a monster 2016 season for the Bulldogs with 3,798 total yards of offense and 37 total touchdowns. Fitzgerald was a true dual-threat at quarterback with over 2,000 passing yards and 1,000 rushing yards.

The defensive side of the ball is headlined by Brookhaven native Leo Lewis at middle linebacker. In his freshman year, Lewis was second on the team with 79 total tackles, only trailing former linebacker Richie Brown. Lewis will fill in for Brown in 2017 and looks to be the leading tackler for the MSU defense.

With a favorable home schedule, including LSU, Alabama and Ole Miss, the Bulldogs have all the ingredients needed to improve on their 6-7 record from last season.

The 2016 season looked promising for Southern Miss under first year head coach Jay Hopson with a 44-35 win over SEC opponent Kentucky. At 5-3 heading into the final four games of the season, the Golden Eagles stumbled down the stretch and went 1-3 to finish at 6-6 overall. However, the season ended on a high note with a bowl win over Louisiana-Lafayette.

Southern Miss will have to replace the school’s all-time leading passer Nick Mullens at quarterback, who set numerous school records while under center for the Golden Eagles. Hopson is confident in both junior Kwadra Griggs and sophomore Keon Howard to replace Mullens.

If the Golden Eagles can prove to be more consistent down the stretch and find a successful replacement for Mullens at quarterback, Southern Miss can surprise a lot of people in the Conference-USA race.

Between the NCAA investigation and the surprising exit of former head coach Hugh Freeze, it’s been a whirlwind offseason for Ole Miss.

The offense should be dominant with sophomore quarterback Shea Patterson, an experienced offensive line and depth at wide receiver, headlined by sophomores AJ Brown and D.K. Metcalf.

Defensively is where the Rebels need to improve after ranking dead last in almost every defensive category last season.

There are a lot of questions surrounding college football in the state of Mississippi, but plenty of upside and room to improve. Should be fun to watch.

Dylan Rubino is the sports editor for The Daily Leader. He can be reached at dylan.rubino@dailyleader.com. Follow him on twitter @DylanJRubino

The Brookhaven Academy Lady Cougars soccer team played with a lot of fire in the 2017 Kickoff Classic over the... read more