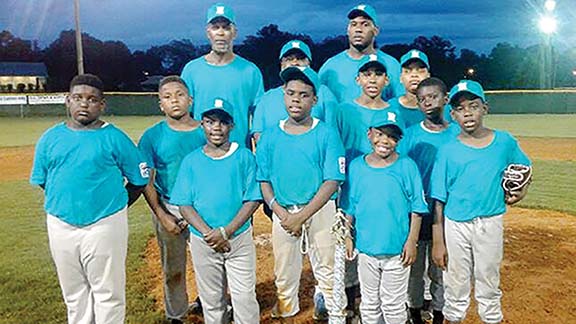 With the A.L. Lott Major League 11-12 team from Brookhaven falling in the state tournament, the door became wide open for other local teams in the league to make a run.

The program ended its 2017 season this week with exciting games to send the season off.

The Tamers of Amite County captured their second league championship in two years by defeating Crystal Springs, a team that lost only two games all year, by a score of 6-2. The Tamers finished as the top seed with a 6-1 record for the season. They were led by their coaches Johnnie Clark, Za’Quarius Tobias and Rowanda Allen.

“We really enjoyed the season,” Clark said. “The coaches, the teams we played and the Dr. A. L. Lott organizational staff were great. We are looking forward to next year.”

In girls’ softball, the Diva Girls from Liberty defeated the Stickz of Lilly Hill 10-9 in an exciting back-and-forth playoff game. This was a three-peat for the Diva Girls coached by Alice Fields.

“I am just speechless that we were able to get to this point with all our new and young girls this year,” Fields said. “We were expecting to use this season as a rebuilding year. Our team veterans demonstrated great leadership qualities to get our team in a position to compete for this covenant title. I am overjoyed with my young team. We enjoy coming to Brookhaven, they have a nice facility here.”

The Lilly Hill Stickz, coached by Tim Catching and Lamont Sandifer, fought until the end, but fell short in the last inning of the winner-take-all matchup.

“I am proud of my guys for playing hard and not giving up. Our pitching got us in a bind early, but our bats dug us out and kept us in the hunt,” Eleven 8 coach Anfernie Clair said.

The pieces are in place for Co-Lin