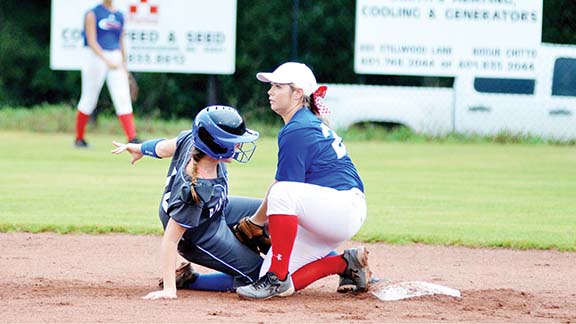 Kailyn Jordan of BA slides safely into second base in a game last season. (File photo)

Behind a strong pitching performance from Emily Claire Felder and timely hitting, the Brookhaven Academy Lady Cougars moved to 3-0 with a 8-3 win over Columbia Academy Thursday evening.

The Lady Cougars trailed for the first time all season after giving up one run in the top of the first to fall behind 1-0.

The team responded right away and put up five runs in the bottom of the inning to take a 5-1 lead.

It’s been an impressive start to the 2017 fast pitch season for the Lady Cougars as the team has out-scored its opponents 30-8 so far. The team has played well at the plate and on the mound.

“I’m so proud of the effort so far,” Brookhaven Academy head coach Becky Flowers said. “We fought through some moments of adversity and we could have rolled over, but instead we rose above and conquered it.”

Madi Smith started the first two games for the Lady Cougars and earned some rest from pitching Thursday. Felder filled in for Smith and pitched well, going all seven innings and gave up three runs on five hits, no walks and five strikeouts on the night. Felder also chipped in at the plate with a double in the fifth inning.

The rest on the mound paid off for Smith. The two-way star for the Lady Cougars led the team at the plate with a double and a single. Madison Moak, Julie Anna Bartman, Kailyn Jordan and Cameron Watson each had one single to round out the hitting total for Brookhaven Academy.

While the team has been dominant at the plate putting up 30 runs in three games, defense is where Flowers thinks her team needs to improve.

The Lady Cougars had three errors in the field Thursday night against Columbia Academy, something that the head coach doesn’t want to see happen again.

“We had seven hits, but three errors in the field,” Flowers said. “We definitely want to cut back on those mistakes before they become costly in a big game.”

Brookhaven Academy has seven errors in their first three games and at times have put the team in tough situations and made the games close. Great pitching and a strong approach at the plate have put the Lady Cougars over the top.

“I thought our girls did a good job of staying composed,” Parvin said. “Yes, the season is young, but Thursday was the first time we have been behind in a game.”

Maggie Wilks led Columbia Academy at the plate with two singles. Kyla Williams, Bailey Buckley and Megan Rowley each had singles to round out the hitting total.

The Brookhaven Academy Lady Cougars head to Columbia to participate in the Columbia tournament this weekend.

“I’m very proud of the girls for staying the course, even when adversity strikes,” Flowers said.

Plenty of unknowns with football in Mississippi

In a tumultuous offseason filled with drama, surprises and plenty of preseason hype, the 2017 college football season is just... read more