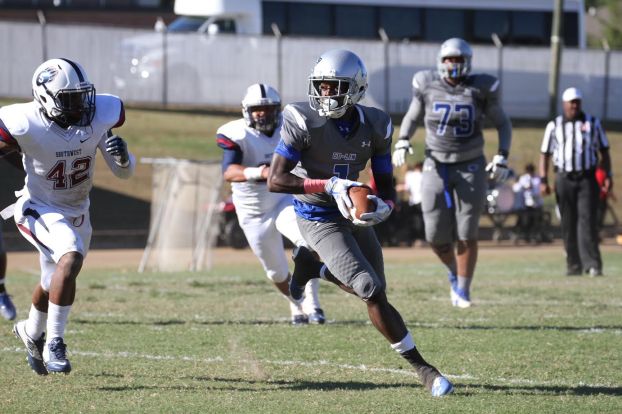 Nero Nelson of Co-Lin (1) runs after the catch in their win over Southwest last season. (Photo submitted)

The pieces are in place for Co-Lin

The Copiah-Lincoln Community College Wolves enter 2017 with several new faces, and the same amount of confidence.

Co-Lin finished 2016 with a 6-3 record in the MACJC, and climbed the NJCAA polls to No. 3 after the second week of the season. This year the Wolves have their eye on the MACJC title and the coaching staff believes they have what it takes to get there.

This year’s team is built around speed and power in nearly every facet of the game. The Wolves’ offense is full of athleticism, and the line of scrimmage on both sides of the ball looks to be just as good or better than last season. Combine this with solid linebacker and secondary play and a confident special teams unit and the Wolves have a recipe for success in the always-tough MACJC. The keys to success are to remain healthy and limit big plays down the field as much as possible. Overall, the coaches have put the pieces in place for yet another exciting year in 2017.

Leading Co-Lin’s offense at quarterback is Auburn University transfer Woody Barrett. Barrett, a former four-star prospect, was redshirted in 2016, but racked up impressive numbers his senior year of high school at West Orange High School in Winter Garden, Fla. During his senior season, Barrett threw for 2,018 passing yards with 20 touchdowns, and 1,413 rushing yards and 23 touchdowns. The 6-3, 230 pound duel threat quarterback has the ability to come to Wesson and make an immediate impact for the Wolves.

Competing for playing time with Barrett is Madison Ridgeland Academy quarterback Hayden Davis. Davis battled through several injuries during his high school tenure, but had flashes of greatness while on the gridiron. The 6-1, 210 pound, pro-style quarterback completed 142 of 228 passes for 2,003 yards and 16 touchdowns in 13 career games for MRA. As the Wolves move into the 2017 season, the offensive scheme seems to be the same. However, with two quality signal callers who have contrasting talents, the options are endless for the Wolves.

Joining the quarterbacks in the backfield are a pair of talented freshmen running backs, Rico Owens, of Greenwood High School, and Deion Dampier of Mendenhall High School. Both players are powerful backs that can break tackles, and make players miss in the open field. The duo hopes to fill the role of former Co-Lin standout Ladarious Galloway (University of Tennessee Martin). Galloway led the Wolves with 182 rushes for 1,003 yards and 10 touchdowns in 2016.

Co-Lin looks to utilize a young group of tight ends in 2017. The group will be used in the run game, but coaches plan to get them involved in the passing game as much as possible.

The Wolves have become a powerhouse of harvesting talent at the wide receiver position and 2017 looks to be no different. With two solid quarterback options, the Co-Lin wide receivers will have an opportunity to be explosive this season. Lost to graduation are Datrin Guyton, Jr. (Bowling Green University), last year’s leading receiver, DeAnthony Blake (Arkansas Tech), and Alexander Hollins (Eastern Illinois). The Wolves look to sophomore Nero Nelson to lead the young group of receivers. Nelson hauled in 22 catches last year for 326 yards and three touchdowns. The Hollandale native also shined as a punt and kickoff returner during his freshman campaign and landed MACJC All-State First Team honors. Nelson hopes to utilize his speed and agility to continue his dominating play in the MACJC.

Joining Nelson as a returning sophomore is Copiah Academy graduate Ryan Drew. Drew caught two touchdown passes last season and accumulated 117 receiving yards. He proved to be a solid target in the flats and on quick routes, and hopes to continue in a role of leadership this season.

Jamarcus Weatherall also returns for his sophomore campaign with the Wolves. Weatherall finished 2016 with six catches, but looks to increase that number this year after a successful off-season. He is a hard-worker who does not require flash to show his worth to his teammates and coaching staff.

Kobe Gates and Kevin Romer, Jr. are two new faces on the Wolves’ receiving stable. Gates, a Jackson State transfer from Walnut Grove, looks to make an immediate difference in 2017. Romer, a freshman from Coral Gables, Fla., will be a great target for Co-Lin’s passers.

No offense is complete without the men in the trenches. The Wolves’ offensive line hopes for strong, consistent play to help this talent-rich offense reach their full potential. Elbert Watson, a sophomore from Tunica, will lead the young offensive line in 2017 from the tackle position. This is one of the deepest squads of linemen that Co-Lin has had in recent years, which promotes competition for starting roles and allows players to be rested when needed. Combine this depth with size and athleticism and the Wolves will have the ability to clear running lanes and protect the pocket.

With a solid offensive line, a backfield filled with raw talent, and a group of wide receivers that have the ability to have breakout games at a moments notice, the Wolves have a high-octane offense that will light up the scoreboard this season.

As in year’s past, 2016 was a dominating year for the Co-Lin defense. The Wolves boasted a strong defense line and linebacker corps to stuff the run, and had a lot of help with an impressive secondary. Three outstanding defensive linemen, Deion Pope (Jackson State), Montez Sweat (Mississippi State), and Tyree Owens (East Carolina), transferred in December to continue their football careers. The trio was responsible for 101 tackles, 15.5 sacks, and 21.5 tackles for loss. Luckily, the Wolves have returning sophomores Damion Dickens and Charles Cameron to lead the way in 2017. Dickens, a West, Miss. native, wrapped up 31 tackles last season and a team-high 10 sacks. His efforts landed him MACJC Second Team All-State honors. Cameron finished last season with 23 tackles and six sacks last season. The Morton High School graduate also had a forced fumble and fumble recovery on the year.

The Wolves also have two new players on the defensive line to watch for in 2017, Kendall Jones of Killeen, Texas and Jonathan Lolohea of Lahaina, Hawaii. Both players have received preseason hype and are vying to make an impact.

Other players hoping to make an impression are sophomores James Allen Coley, a Cathedral High School graduate, and Barry Howard of Hollandale, Miss. The pair wrapped up 14 tackles and four sacks last season, but look to improve after a successful off-season.

At linebacker, Co-Lin lost MACJC First Team All-Stater Colton Magee to graduation. Magee led the Wolves with 73 tackles last season and signed with Mississippi College. Sophomore Lamoni Jones of Yazoo City hopes to fill Magee’s role in 2017. Jones finished his freshman year with 16 tackles and a forced fumble, but has higher expectations this season. Look for Jones to be the vocal leader of the Wolves’ defense in 2017. TJ Gray, a Lake High School graduate, returns for his sophomore season with hopes of utilizing experience gained from his freshman campaign. Incoming linebackers include Florida State transfer Sh’Mar Kilby-Lane, and Greenwood native Jakaiszer Glass. Look for this group of linebackers to be very quick and physical with the ability to make plays all over the field.

In the secondary is a talented group of defensive backs that hopes to terrorize opponents passing game. Leading the way is sophomore Paul Wilson of Vicksburg. Wilson garnered 23 tackles last year and three pass breakups. Jeffery Drake, a West Point High School graduate, also returns for his sophomore year after recording 11 tackles, two pass breakups, and two interceptions in 2016. The Wolves will look to incoming freshmen to fill the holes left by Isaiah Swopes (University of Northern Colorado), Rhoy Williams (University of Louisiana Monroe), and Jaquarius Landrews (Mississippi State University) who were lost to graduation.

The Wolves’ special teams looks to stay the same as last season as kicker and punter Griffin Sublett returns for his sophomore year. Sublett was a consistent player in 2016 earning NJCAA Player of the Week honors twice after stellar performances in both placekicking and punting. The Co-Lin staff can feel confidant-sending Sublett, a Pascagoula native, to the field for any special teams need. Long snapping for the Wolves is sophomore Chance Herbert, a Brandon High School graduate. The two make a solid combination that will benefit Co-Lin this season.