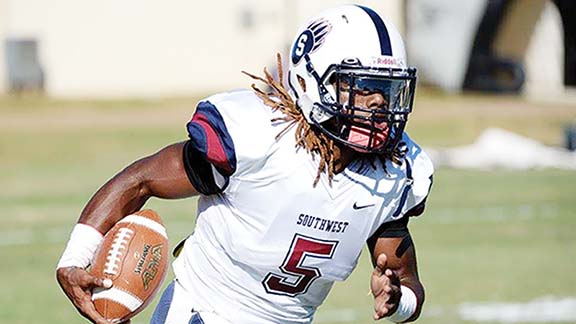 Chase Mitchell of Southwest runs with the ball during a game played last season. (Photo from Southwest athletics)

The 2016 season started with a lot of promise for the Southwest Bears football team, but a large crop of injuries took care of that. The 2017 season arrives with some question marks for the team.

“We’re yet to see where everybody can exactly fit in,” head coach Tucker Peavey said prior to pre-season camp. “But, I think we’re better off overall as a team (than last year). The players seem to have a good work ethic and they’re a good group to be around.” However, Peavey said, “We’re just going to have a lot of inexperience at some spots (so) we’ll have a lot of freshmen out there” on the field.

What will it take for Peavey to consider the season a success? “As always, winning,” he said. “That’s what they’re all working for, that’s the reason they’re here” he said of his players.

“Yeah, we’re trying to improve individually. A lot of junior college is about individual performances because they’re wanting to get to bigger and better things and sign with a four-year school. But, the fundamental thing is that you want to win and that’s where we’ve got to get over the edge.”

“I felt like last year what happened to us in our defensive line was the difference in several wins that we didn’t get,” Peavey continued. “So, hopefully we can maintain the depth there that we need and we’re going to have to have some production offensively out of some new people.”

Offensive coordinator Cam Achord said the Bears will “try to be an up-tempo offense. We’re going to try to be as balanced as possible, formation-wise, using our tight end sets, our three receiver sets.”

“Obviously,” Achord said, “with Juwan Adams coming in at quarterback, it’s going to help us offensively to do a couple of different things. But, we’ll be up-temp and, hopefully, put a lot of points on the board.”

Achord said the Bears’ offense will be “very similar to what we’ve done in the past, as far as formations. We’re still going to be no-huddle. We may line up really fast and not snap the ball (or) we may line up and snap it as fast as possible. We’re going to have the ability to do both.”

Achord said the big-play ability is one thing the Bears have been lacking “so we’re hoping we have some guys who will prove themselves in fall camp and throughout the season to give us that big home run threat.”

Sophomores John Hines and Von’Darius Freeman look to be keys for the Bears’ front.

At linebacker, the Bears have Kendrick Anderson and Toby Jones back from 2016. Anderson is “pretty much a student of the game and he’ll be the guy making all the calls and making sure we’re getting lined up,” Bowman said.  He also added he is expecting big things from Jones.

Also looking to see time at linebacker is freshman Chanler Ferguson, a transfer from Florida Atlantic University. Bowman said Ferguson has come in “and picked up the defense well.”

Barnes “did a good job in the spring and has really shown a lot of improvement” stated Bowman while Gaddis “is kind of like our quarterback in the secondary. He’s a kid who can get us where we need to be on the field and is going to carry out the game plan.”

Bowman said Jordan is probably “our most improved player from last year” and Mitchell “is going to be a strong force for us in the secondary. He’s a phenomenal football player and we look forward to him making a lot of plays for us.”

Also looking to see playing time in the secondary will be freshmen Roderrickis Dozier, Conner Cook and Martevious Washington. Bowman said the trio “has really picked up on our defense.”

“From a scheme standpoint,” Achord stated, “we’ll be similar to what we’ve done the past four years (but) we may have a couple of different wrinkles. But, at the end of the day, I believe special teams are all about effort and that’s the thing we’ve stressed to (the players). We like to be high energy, high effort on special teams and if you’re going to be (that way) that’s going to give you results and that’s what sets the tone for your team.”

The Bears kick off the season at 7 p.m. on Aug. 31 when they host the Tigers of Coahoma Community College at John I. Hurst Stadium.