An 18-year-old woman fighting a minor girl on a video that’s making the rounds in Lincoln County has been charged with aggravated assault and could face jail time if convicted.

A reader who shared a video of the fight said the incident took place at a gravel pit on Opelousas Lane NW near California Road NW in late July.

“They were fighting over a guy,” Lincoln County Sheriff Steve Rushing said.

In this case, it appears the two young girls were in a dispute over a boy so they chose to fight it out. They called their friends to be there and watch the confrontation, Rushing said. At least a dozen individuals circle the girls as they fight in the dirt, illuminated by pickup truck headlights. No one attempts to stop the fight.

In the video, both girls are dressed for the occasion, wearing workout clothes and tennis shoes.

Holden is on top of the minor for most of the 2:42 minute video, head-butting her in the face while holding her arms down. She hits her at least five times.

“You done? You want some more?” Holden asks her.

She gets up to leave and the girl grabs her. She waylays her with her fist to her face, hitting her five more times before crawling back on top of her and head-butting her again.

“You’ve had enough?” she asks the girl, as the person shooting the video zooms in on the girl’s bloody face.

Holden gets off the girl, and kicks her in the head as she does. Both girls are seen walking away from each other when the video abruptly ends.

The other girl was later treated for minor injuries at King’s Daughters Medical Center, Rushing said.

She was also arrested in December by Brookhaven police officers for possession of marijuana in a motor vehicle and expired vehicle tag. 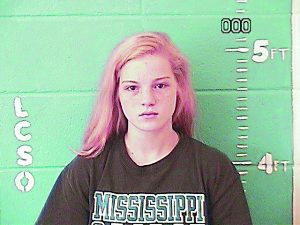 Lipsticks and pigskins at Brookhaven High School and Brookhaven Academy

Whether it’s Lipstick & Laces or Pigskins and Pearls, the ladies of Lincoln County will have a place to go... read more