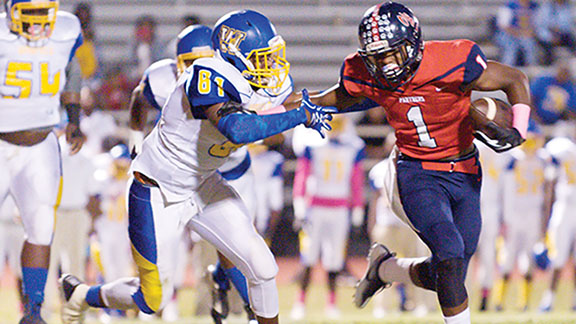 Brookhaven running back Damarrell Leggett (1) stiff arms a defender in their win over Wingfield last season. Leggett and the rest of the Panthers will face tough competition to start the 2017 football season. (File photo)

Brookhaven High School head football coach and athletic director Tommy Clopton knew what he was getting into when he was making the schedule for this coming season.

The Brookhaven Panthers open the season with a jamboree game Friday night at Brandon High School.

The tune-up game is followed by the season opener when the Panthers host perennial power Pearl High School on Aug. 18.

Why schedule such tough competition to open up the season?

The answer is simple.

“We want to see where we stand as a football team right away,” Clopton said. “Our players and coaches are up for the challenge. They’ll be ready.”

While the game this Friday is only a scrimmage, the level of competition the Panthers will face the first two weeks is a significant step up then they’ve faced in the past.

Both Brandon and Pearl are 6A teams that contend for state championship every season and this coming season is no different.

Brandon finished the 2016 season ranked eighth in the state with a 10-4 overall record and lost in the state quarterfinals to Petal 14-10.

The Bulldogs will field a different team this season, replacing their starting quarterback and two leading rushers from last season. On defense, they are forced to replace four of their five leading tacklers from a year ago.

Facing Brandon Friday night provides a good measuring stick to see where the Panthers stack up against some of the best competition in the state.

The real obstacle to hurdle is in their season opener, where they’ll host 6A runner-up Pearl High School.

In the 6A state championship game, the Pirates ran into a stonewall against Clinton and lost 49-35.

The Pirates got off to a slow start to the 2016 season and went 2-3 over their first five games with losses to Warren Central, Northwest Rankin and Petal.

Pearl went on a tear after that and won their next nine games and rode that wave all the way to the state championship game in Starkville, where they fell to Clinton.

Pearl enters this season ranked No. 1 in the state and 25th in the nation, according to USA Today and deservingly so. The Pirates return their top three weapons on offensive, which includes their starting quarterback, running back and top wide receiver from last season.

The offense for the Pirates is led by senior wide receiver Johnquarise Patterson, who recently committed to play at Mississippi State next season. Patterson abused opposing defenses, hauling in 59 catches for 868 yards and 12 touchdowns last season to lead an explosive aerial attack.

Those three weapons all return for their senior year as Pearl looks to be even better on offense this season.

On defense, the Pirates return their top two tackles from last season in Willie Brown and Tylan Knight. The two combined for 264 total tackles and 16 sacks a year ago.

Clopton knows the challenge that lies ahead for his football team and expects  great competition to open up this football season.

With all of the returning players on both sides of the football, the Brookhaven Panthers are well equipped to handle any competition thrown their way and look to make a statement these next two weeks.

The road doesn’t get any easier after that. The Panthers have two road games against rival Lawrence County and South Pike after their showdown against Pearl.

Friday night will be a great test for Ole Brook, but the real test comes on opening night Aug. 18. It should be a great two weeks of football for the Panthers.

The 2016 season started with a lot of promise for the Southwest Bears football team, but a large crop of... read more