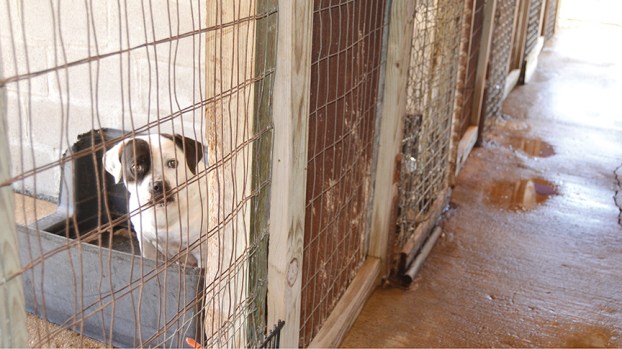 Photo by Donna Campbell/Brookhaven aldermen are meeting in work sessions over the next several Tuesdays and Thursdays to decide the city’s budget for the next fiscal year. One issue they’ll discuss is how much the city can afford to spend on a new animal shelter. A dog peers through the grate of its pen at the Brookhaven Animal Shelter in February. The current shelter, which is at the city dump, is in need of repair.

Brookhaven aldermen will decide this month how the city’s funds will be divided for the next fiscal year, which starts Oct. 1.

For four of the seven aldermen, it will be their first time with such an important municipal task.

Throughout the month of August, on Tuesday and Thursday nights, the board will meet and work on the city budget. The meetings are open to the public. They begin at 5:30 p.m. in the board room at the Lincoln County Government Complex. No votes are taken at these meetings, which may last several hours.

“We went through our general fund Tuesday night,” City Clerk Samantha Melancon said Wednesday. “We still aren’t through with it, so we will touch back on it Thursday. It generally takes a few work sessions to go through each budget.”

The board will look at three separate budgets — general funds, water/sewer and solid waste.

They will finish up with the general funds on Thursday and begin working on the water/sewer budget.

“We look at revenues to expenditures and go through each line item and see where we need to adjust things,” Melancon said. “These are preliminary numbers and all budget request from different departments are plugged into it.”

It’s up to the board to decide what amount of money to give to each department.

“It’s really an educated guess of what the city is going to need. You use history, assessed values from the county and sales tax. You determine how we’re collecting now and determine what the future looks like,” Melancon said.

The city is currently operating on a $17 million budget.

The board will also look at funding amounts for several major projects, including construction of a new fire station and animal shelter as well as airport improvements.

Aldermen haven’t decided where the fire station or the shelter will be located.

Airport improvements will be fully funded by a grant. In July, the airport received a competitive grant from the Mississippi Department of Transportation for $173,903 for improvements.

In March, aldermen were shown a preliminary floor plan of the new shelter. Based on the plan, the shelter would cost about $150,000 including site preparation and construction, said Mike McKenzie, an engineer with WGK Inc. The final cost would be determined by where the city wants it built. The current shelter sits at the end of a dirt road that winds past piles of debris at the city dump. Two rows of dog runs, about 18 total, are covered with a sheet-metal roof. One wall is closed in with sheet metal. The other side is open.

Mayor Joe Cox said earlier this year that $100,000 out of the city’s general fund has been earmarked to build the shelter.

Aldermen must approve the budget before Sept. 15.