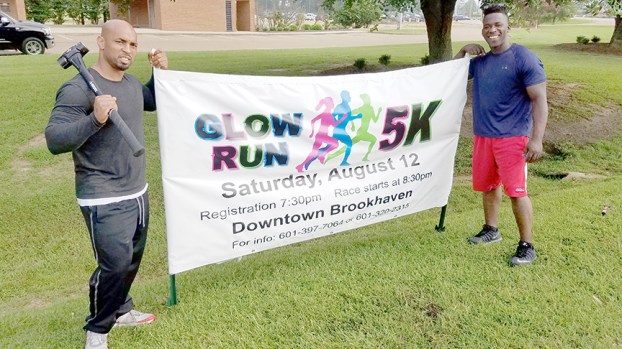 In an effort to make exercise fun, owners of a Brookhaven fitness center are hosting a 5K walk and run Saturday night that let participants glow in the dark.

Rico Sorrell and Tra Collins with Love2Live Fitness for H.E.R. are joining forces with the O Foundation, a Lincoln County non-profit that has been fighting obesity in the area for years, to sponsor the event.

About 60 people have signed up already, but Collins said they’re happy to make room for more. The participants are so eager to be involved in this 5K that they’ve been training every Saturday for the past month, Collins said.

He and Sorrell decided to organize the 5K because the members of the women-only gym have requested it. Many of the women, Collins said, have set personal goals to finish a 5K. He said he felt like they should offer to host one so they could reach that goal.

The glow? Well, that’s just for fun, he said.

Walkers and runners will wear neon glow bracelets and necklaces and carry glow sticks as they trek through downtown Brookhaven. They’ll start at Bank of Brookhaven on Brookway Boulevard and head down West Cherokee Street to the downtown area. They’ll loop around on Whitworth and Railroad avenues and then end back at the bank. Check-in and registration Saturday is from 7 to 7:30  p.m. at Love2Live Fitness at 524 Schwern Ave. Then everyone will walk to the bank to begin the race at 8 p .m.

The 5K is open to all ages.

“We want to make it family oriented,” Collins said. “We’re with them every step of the way. I believe in team work and togetherness.”

Prizes will be awarded to place winners. Collins believes the best prize will be participating.

“Brookhaven is going to be the most fit city in Mississippi,” he said.

Brookhaven aldermen will decide this month how the city’s funds will be divided for the next fiscal year, which starts... read more