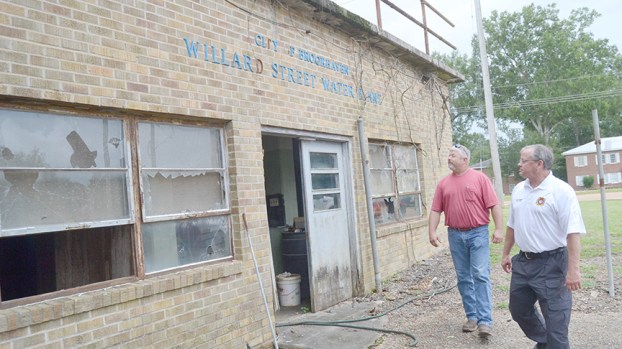 Old water plant to be a training facility

Brookhaven’s public works director wants to take a city eyesore and turn it into a training facility for firefighters, law enforcement officers and other first responders.

But Lewis would like to see it become something positive for the city. He’d rather see the city repurpose it into a training facility rather than spend the money to have it demolished and hauled away.

“Some of the walls surrounding the facility are 15 inches thick, so we’d have to hire someone to come tear it down. You have the cost of tearing it down and then moving stuff to the city landfill and we don’t want it there,” Lewis said.

Department heads have considered using the space for additional parking or using the building as a storage facility, he said.

“We’re hoping to create a dual purpose building for the fire department and law enforcement. I have a brother on the sheriff’s department and they currently don’t have a training facility, they have a shooting range, but that’s it,” said Lewis.

Lewis said they plan on building a metal frame on top of the building so the fire department can practice rope rescues.

“Keith had called me about it and told me that the city was wanting to do something with the building, rather than tearing it down. He told me about the possibility of a training facility and I thought it was a great idea,” said Brookhaven Fire Department Chief Tony Weeks.

“Our trailer works well, but when you go through it a few times you already know the layout,” Weeks said. “It would be great to have some additional training space.”

Lewis hopes the building is operational by the spring. He expects to sell scrap metal and various pieces of machinery that are in the building to help with the cost of renovations.

“We will probably have the inside done before the spring. We’re still in the preliminary talks to see how this all turns out, but I’m hoping this works out. It will be great for our local officials to have a spot to train and better improve their skills,” said Lewis.

The days of getting shushed in the library are no more. Especially the main branch of Lincoln-Lawrence-Franklin Regional Library in... read more