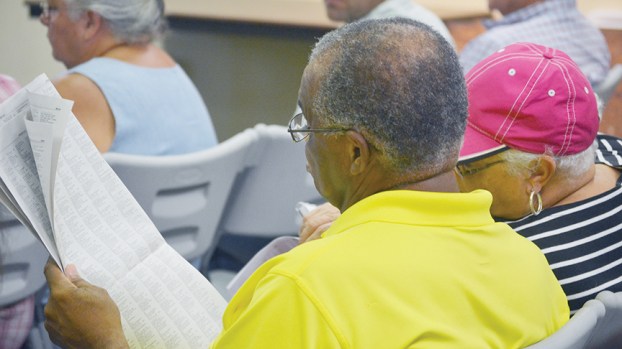 Photo by Donna Campbell/Andrew and Betty Spiller look through the delinquent tax list published in The Daily Leader Thursday as they wait for a tax sale seminar to begin. Several dozen people attended the seminar hosted by the Lincoln County Tax Collector’s office to learn how to bid on property online.

Lincoln County real estate investors can put down the paddles and grab a keyboard. The yearly land sale auctions are now online.

This will be the first tax certificate sale to be conducted online for Lincoln County. It’s also the first in the state for CivicSource, the company approved by Lincoln County Board of Supervisors to conduct the sale.

“It will probably be difficult for some elderly people but it’s going to be better for the future,” said Andrew Spiller, who attended a how-to workshop at State Bank’s State Room Thursday night. “It will give people more options for bidding.”

The 73-year-old said he’s looking forward to bidding on properties with his wife Betty from the comfort of their own home instead of waiting for hours over two days at the courthouse for a parcel to come up for bid.

“You can do it and just watch it from home,” he said.

The Spillerses looked through the newspaper list and then went online at CivicSource.com to see a map of the property. He said he likes the ease of the web site.

“It’s got all kinds of features,” he said.

In the past, bidders gathered at the Lincoln County Government Courthouse in the circuit courtroom upstairs over a two-day period and participated in a high-bid auction. The delinquent properties were printed in The Daily Leader twice in the three weeks leading up to the tax sale.

Though the delinquent properties will still be published in print, the sale will be online. Properties were published Thursday and will appear again Aug. 17 so that interested parties can look through the list of more than 1,500 properties available.

Investors must register at CivicSource.com prior to bidding. They’ll add bank account information so winning bids can be deducted automatically. They’ll also need to submit a W9.

The web site is easy to navigate, which is one of the reasons Tax Assessor/Collector Blake Pickering chose CivicSource.

He also liked the format of their sale.

Created in 2008, CivicSource is an online marketplace for auction and purchasing tax distressed properties.

Because this is a change to the usual process for bidding on tax delinquent properties, Pickering will have employees from his staff as well as CivicSource in the supervisors’ boardroom during the hours of the sale Aug. 28 for any bidders who may need assistance during the auction. There will also be computers available, but Pickering encourages bidders to bring their laptops, tablets or even smart phones if possible. Wi-Fi will be available.

Pickering said CivicSource is conducting the auction at no charge to the county. They receive their pay from a fee imposed on the winning bidder.

“They make money if they make us money,” he said. “Whoever wins the sale will pay a fee of 1.5 percent of the property purchase price, which will be capped at $15.”

That fee, which goes to CivicSource, has not been imposed in the past, he said.

Allowing CivicSource to conduct the auction will also save the county money since Pickering’s office won’t be tied up for two days. He must close his office for the two-day sales.

Circuit court judges can’t use the courtroom during the physical sale either, so having it online will free up that space starting next year, he said.

Pickering said the county will also make more money on an online sale because it opens it up to bidders in other locations.

“Hopefully it will generate more revenue for the county,” he said. “The more people are bidding the better the county should come out.”

Even when with the yearly sale online, the delinquent properties will continue to be published in The Daily Leader prior to the bidding, he said.

“It helps people to get that list and research what they may want to buy,” he said.

Ruth Calcote attended the workshop hosted by Pickering’s office. She was worried about going online to bid, but her concerns were put to rest.

Pickering said his office is open Monday through Friday from 8 a.m to 5 p.m. for anyone who has questions about the online bidding process or would like a demonstration on how to navigate CivicSource.com.