A Brookhaven man traipsing around Brooks Apartments naked Thursday night soon found himself cuffed and flat on the ground.

James Cliburn, 58, of 410 Wesson Road, was arrested at 300 Old Wesson Road on charges of public drunk, disturbing the peace and indecent exposure by officers with the Brookhaven Police Department, said Capt. Clint Earls.

A caller to police dispatch said there was a naked man running through the parking lot.

Earls said when police arrived, they discovered the caller was indeed correct.

“They found him that way,” he said.

A video being shared on Facebook shows a naked Cliburn being arrested by officers.

Do police put naked suspects in their squad cars?

“If that’s the way they prefer to go,” Earls said.

In this case, officers gave Cliburn a towel for his trip to the Lincoln County jail, where the man received some government-issued attire before posing for his mug shot, Lincoln County Sheriff Steve Rushing said.

Earls said officers do not know what prompted Cliburn’s nude jaunt around the apartment building. 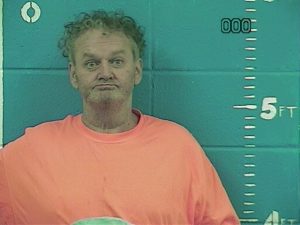