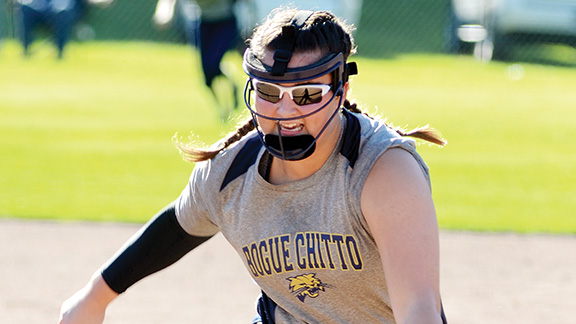 Freshman Codi Leggett of Bogue Chitto goes to scoop up the ground ball in a game played recently. (Photo by Dylan Rubino)

The 2017 fast pitch softball season saw many great teams in the local area, including the Bogue Chitto Lady Cats winning the 1A state championship.

The new school year brings in new players and new teams as the 2017 slow pitch softball season officially kicks off in the area today.

Bogue Chitto opens its season today at home as the Lady Cats host the Bogue Chitto Lady Bobcat Classic, where they’ll face Lincoln County rival West Lincoln, Crystal Springs and Franklin County. The Brookhaven Panthers will travel to Vicksburg to participate in the Warren Central Classic to open up this season.

Last season in slow pitch, Bogue Chitto fell to Hamilton in the 1A state championship series in three games and the players wanted to redeem themselves in fast pitch.

They did just that. The Lady Cats made a run all the way to the 1A state championship series where they faced their nemesis Hamilton. Bogue Chitto won the first two games and won its fourth state title in fast pitch since 2010.

Part of what made the Lady Cats special was the play of Codi Leggett and seniors Terrah Nelson and Cherie Savoie.

Nelson and Savoie won’t be back this year, but Leggett and the rest of the younger players return to make another run at a state championship. Some players to look out for this year include junior Baileigh Jackson, sophomore Stevie Montgomery, senior Reagan Kirkland, freshman Julianna Frazier and freshman Kayci Beth Wallace.

Last time we saw West Lincoln, they suffered an early exit in the 2A state playoffs in fast pitch and fell to Puckett in two games.

The Lady Bears will look a little different this season without their leader and catcher Makennah Redd behind the plate.

Redd was a mainstay in the West Lincoln lineup for a while and led the team at the plate last year in fast pitch with a .415 batting average and 24 RBIs.

Junior Megan Gerald and eighth grader Bailee Goodson shined for the Lady Bears during the fast pitch season. Gerald batted .311 during fast pitch and owned a 2.11 ERA as a starting pitcher. Goodson had a team-high .429 average last season at the plate.

Even without Redd and Anna Brooke Davis, the West Lincoln Lady Bears have plenty of players ready to compete this slow pitch season and beyond.

The Lady Panthers proved last fast pitch season they’re battle-tested and overcame many obstacles to make a run in the 5A state playoffs.

The team ultimately fell to Long Beach in the second round, but showed a lot of promise for the future.

The team is forced to move on from seniors Macy Ziskin, Tia Bussey, Cheyenne Motley and Jada Henderson. Each of those players left a profound impact on the program and each of them will be difficult to replace.

This slow pitch season provides a new opportunity for the younger players to shine and make a name for themselves to start off the new school year.

Seniors Jadeyn Fuller and Rileigh Allen will be looked on to lead the team this season.

Madi Miller, Meg Foster and Kyla Henderson are other names to look for as the slow pitch season begins.

There are a lot of new faces for Ole Brook, but the coaches feel this team has enough to make another run.

The Wesson Lady Cobras are another young team that’s building a solid program in the area.

The team will have to move on from senior leader Harmoni Ashley, who led the squad with a .444 batting average.

The Lady Cobras went 14-9 in the regular season, but fell to Choctaw County in the first round of the 3A playoffs.

Sophomores Anna Claire Crow and Shelbi Maxwell will be the two players to look out for this slow pitch season and later on in fast pitch.

It was a rainy and muddy start to the football season as the West Lincoln Bears hosted the Wesson Cobras... read more