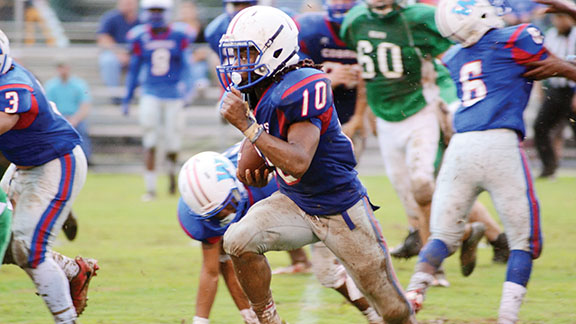 Damien Smith of Wesson (10) rushes for a touchdown in their scrimmage against West Lincoln Friday night. (Photo by Dylan Rubino)

It was a rainy and muddy start to the football season as the West Lincoln Bears hosted the Wesson Cobras in a scrimmage to unofficially kick off the 2017 football season.

The Wesson offense used a strong ground attack, including three rushing touchdowns, to give the Cobras the victory in the scrimmage by a score of 19-0.

With Friday night being the first live game action both schools have seen this season, wet conditions on the field did not help either team as turnovers and missed tackles were the theme of the night.

Each team traded possessions starting at the 50-yard line and played two 12-minute quarters to decide a winner. The Cobras powered through the mud and the wet field to rush their way to the victory.

With just over two minutes in the first quarter, Wesson marched down the field on its opening drive, capped off by a 25-yard rushing touchdown to give them the early 6-0 lead.

With less than a minute remaining in the first quarter, sophomore running back Damien Smith took the handoff and broke through the left side of the line and rushed for a 15-yard score to increase the lead to 13-0.

Both defenses showed signs of life throughout the game by forcing turnovers and making tackles in the backfield to stop drives.

Both defenses fought hard through the remainder of the second quarter, but Wesson put together one final scoring drive with time winding down in the game.

Wesson senior Jeremiah Barlow took a handoff and ran straight through the inside and punched in a touchdown to cap off the 19-0 scrimmage victory.

Senior Dale Thigpen made his first start at quarterback for the Cobras after playing running back and defensive back for the past three seasons.

Thigpen ran the ball out of the shotgun most of the game and made some big runs on the ground. Thigpen also connected with his receivers on some deep passes.

After the Wesson defense gave up 437 total points last season to opposing teams and 268 over the last five games, the coaching staff knew that they had to improve on the side of the ball.

It was only a scrimmage, but the Cobras’ defense pitched a shutout and looked motivated to make a turnaround from a year ago.

West Lincoln seniors Chase Owen and Matthew Case split time at quarterback and both made some plays from under center.

Case connected on some passes and moved the ball down field and Owen used his legs to keep drives going.

West Lincoln had problems holding onto the football in tough conditions, but fought through it and made the most of their opportunities.

The West Lincoln Bears will host Mount Olive Friday night in their season opener. Kickoff is set for 7 p.m.

The Wesson Cobras open their season Friday at home against Crystal Springs. Kickoff is also set for 7 p.m.

The Egg Bowl is getting really nasty

For such a silly name for a rivalry game, the Egg Bowl has quickly built up into one of the... read more