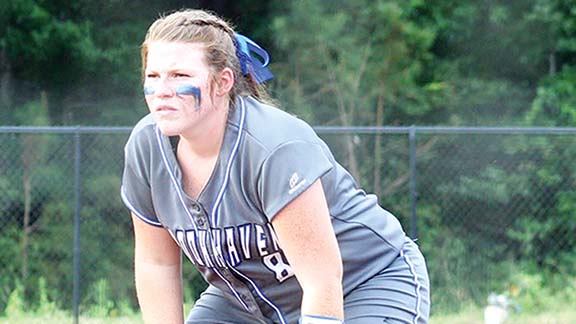 Cameron Watson of Brookhaven Academy gets ready to field a ground ball in a game played this season. (Photo submitted)

The Brookhaven Academy Lady Cougars dug themselves a hole early and couldn’t fight back as rival Simpson Academy took the win Friday night by a score of 3-1.

The loss drops the Lady Cougars to 4-3 overall with games against Copiah and Simpson Academies coming up this week.

“We had the opportunities to both score and make some pitches or defensive stops and we didn’t capitalize on those chances,” head coach Becky Flowers said.

Simpson Academy got on the board in the bottom of the first inning on a fielding error and a wild pitch that scored two runs to make it 2-0 Simpson.

In the bottom of the second inning, Simpson Academy added to their lead on an RBI single from Abigail Carter and made it 3-0 Simpson.

Pitching was strong on both sides for both schools and made the game close.

Cameron Watson led Brookhaven Academy at the plate going 2-for-3 with two singles. Jana Case, Madison Moak, K.K. Jordan and Madison Thompson all had a single to round out the hitting total.

Leah Beth Luckey got the start for Simpson Academy and pitched the complete seven innings, giving up one earned run on six hits, no walks and striking out seven batters.

Smith hit an RBI sacrifice fly to deep left field in the top of the sixth inning to put one run on the board, but Simpson Academy held on for the victory.

Carter led Simpson Academy at the plate, going 2-for-2 with one RBI on the night. Morgan Griffith, Anna Claire Walker and Kristin Busby each had a hit to round out the hitting total for Simpson Academy.

“Both Copiah Academy and Simpson Academy are having impressive seasons thus far, so we will definitely see where we measure up.”

Brookhaven falls to Brandon in scrimmage

It was only a preseason scrimmage for the Brookhaven Panthers Friday night at Brandon, but it provided a measuring stick... read more