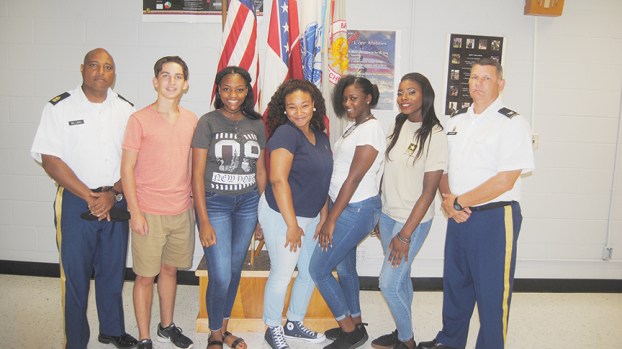 Seniors Shaynia Harris and Kartaesha Stewart, juniors Tytiana Kelly and La Dericka May, and sophomore John Michael Chance, attended the JROTC event at the Army base near Hattiesburg.

“This was something that I’ve never experienced before,” said Harris.

The challenge consisted of 424 cadets from 52 Mississippi schools and three schools from Louisiana. Students attended the camp for six days. They stayed in Army housing and ate their meals at the military base.

According to Col. Craig Weaver at BHS, the cadets were selected to attend the camp because of their leadership in the current program.

“We look at their grades, participation in the program, extracurricular activities and overall performance to determine who we’re looking to put in leadership roles,” Weaver said.

Throughout the challenge week, cadets participated in a fitness test, drill, land navigation, a canoe race and an obstacle course. They also worked on transporting an injured individual on a stretcher and rappelling from a tower.

Each cadet was given the chance to improve in their leadership skills in communication, team building, decision making and planning while serving in various leadership positions ranging from company commander to squad leader, Weaver said.

“We met so many great people,” Stewart said. “We all became close and formed special bonds within a few days. It was hard leaving.”

This year, there are 105 students enrolled in the program.

“We start evaluating students as freshmen to determine if that individual is going to have a future in a leadership position,” Weaver said.  “I love watching kids mature, develop and watching them become successful when they move on from here.”