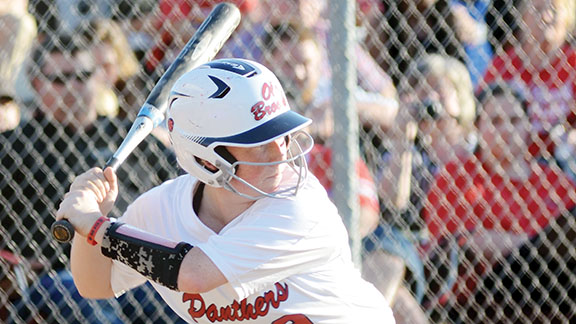 Senior Jadeyn Fuller of Brookhaven (9) gets ready to swing the bat in a game played last season. Fuller had two singles in their loss to Lawrence County. (Photo by Dylan Rubino)

In their first meeting of the regular season Monday night, the Brookhaven Lady Panthers fell to rival Lawrence County by a score 10-6.

The Lady Panthers fall to 0-1 and the Lady Cougars of Lawrence County move to 1-0 on the young season.

“Lawrence County is a very good team,” Brookhaven head coach Mandy Vinson said. “We have to play our best every single game with our schedule this year.”

The schedule is very tough this year for the Lady Panthers including road trips to Forest Hill, West Lincoln, North Pike, Bogue Chitto and Franklin County on the schedule.

Errors cost Brookhaven the game early on as they faced a 7-0 deficit due to fielding mistakes on the diamond.

“We have to cut down on the errors,” Vinson said. “We were down seven runs in the first two innings because we didn’t make the routine plays.”

The Lawrence County Lady Cougars also took the win in the junior varsity matchup by a score of 8-2 to take their first victory of the season.

Lauren Coghlan led Brookhaven at the plate with a double. Angel Wilkinson, Ce’Aria Henderson and Kyjia Willis each had one single to round out the hitting total.

Brookhaven and Lawrence County will face off again Thursday night at Brookhaven. JV first pitch is slated for 5 p.m. with varsity to follow at 6 p.m.