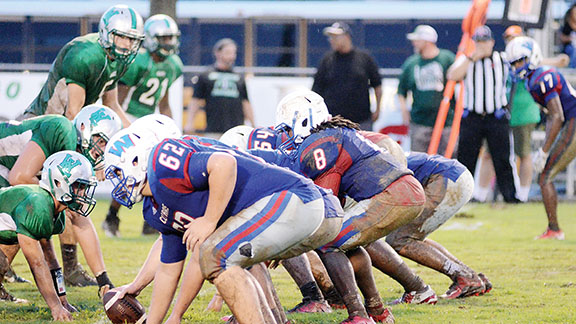 Dale Thigpen of Wesson (8) lines up to take the snap under center in the Cobras’ scrimmage win over West Lincoln Friday night. (Photo by Dylan Rubino)

What we learned from jamboree games

Football season is officially back in Mississippi and the jamboree games from over the weekend kicked off what should be a fun and interesting fall season.

In the area, two new head coaches will look to kick start programs looking for a complete overhaul in West Lincoln and Loyd Star. The expectations that surround Brookhaven High School start to pick up this week when they host top-ranked Pearl.

Here are some key takeaways from the jamboree games.

Last season at the quarterback position, Peyton Burns led a high-powered Cobra passing attack and led an offense that was capable of lighting up the scoreboard.

How will they plan to replicate that production this season? They moved senior Dale Thigpen from running back to quarterback.

In their scrimmage against West Lincoln Friday night, Thigpen provided a new look on offense with his running abilities and athleticism at the quarterback position. The senior showed he’s capable of throwing the ball downfield and is not just a runner.

A lot will be put on Thigpen to lead the offense, but he’s talented enough to make it happen.

It was a wet and muddy night for the Wesson, West Lincoln scrimmage, but the Cobra defense looks improved and ready to prove doubters wrong.

After the Wesson defense gave up 437 total points last season to opposing teams and more than half of them coming in the final five games, the returning players and coaching staff knew improvements had to be made.

Led by Trey Glasper and Jim Guess, the defense flew to the football Friday night and looked faster and more physical than last season. The Cobras created turnovers and made plays in the opposing backfield to stop drives.

The West Lincoln players looked motivated and ready to go Friday night against Wesson, but it’s clear the team will go through growing pains under new head coach BJ Smithhart. That’s the case for any new coach taking over a program.

The defense gave up big plays in the running and passing game to Wesson. Seniors Matthew Case and Chase Owen took the majority of snaps at quarterback. Case connected on some passes and moved the ball down field while Owen used his legs to keep drives going.

Before the Bears take on Mount Olive at home this Friday night, there are still many questions to be answered with West Lincoln, but plenty of talent to overcome those obstacles. The Pirates will provide a good test Friday.

Besides a long touchdown pass and one scoring drive to end the scrimmage, the Brookhaven Panthers proved Friday night against Brandon that they’re capable of hanging with anyone.

The defense is as talented as ever, led by seniors Jeffery Johnson and Jemaurian Jones as the two leaders made big plays.

The defense will need to shine once again if they want to have any chance at taking down top-ranked Pearl.

The offense showed signs of life, but failed to put up any points on the scoreboard against Brandon.

“We had some guys that played well in spurts,” Brookhaven head coach Tommy Clopton said. “We’ve got to do a better job of getting all 11 players on the same page.”

The talent is there for Brookhaven to compete with anyone, even the two 6A powers they face to start this season. Even in a scrimmage loss, Friday night showed the Panthers are for real and they aren’t going anywhere.

In their first meeting of the regular season Monday night, the Brookhaven Lady Panthers fell to rival Lawrence County by... read more