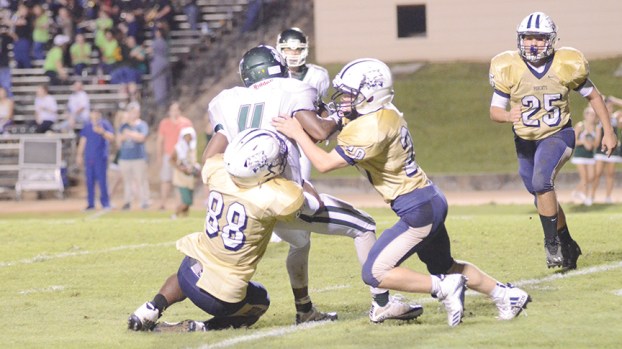 The Bogue Chitto Bobcats got their first victory in almost two seasons Thursday night at Copiah-Lincoln Community College, taking down McLaurin by a score of 42-26 in the KDMC Kickoff Classic.

The win for Bogue Chitto marks the team’s first victory since Oct. 2 of 2015 when they defeated Mount Olive 42-20.

McLaurin came into the matchup having not won a game since Sept. 18 of 2015 when they defeated Enterprise.

Something had to give for the two teams as Bogue Chitto used a strong ground attack to win a high-scoring affair over the Tigers.

The Bobcats got on the board early and took an early 16-0 lead midway through the second quarter.

McLaurin responded midway through the second quarter with a long touchdown drive to make it 16-6.

The two teams traded big plays as each team added a touchdown as Bogue Chitto took a 22-14 lead going into halftime.

Bogue Chitto came out the gates on fire in the second half and quickly moved the ball downfield and increased their lead to 28-14.

After another touchdown from Bogue Chitto nearing the end of the third quarter, the Tigers added another long touchdown drive to make it 34-26 Bogue Chitto heading to the fourth quarter.

It was all Bobcats from there. The team clamped down on defense and shut out McLaurin in the fourth quarter after the majority of the game seemed like a shootout. The Bobcats added one more score with less than two minutes in the game to seal the victory and win by a final score of 42-26.

Senior quarterback Trey Nettles and running back Lafredrick Dillon shined on offense for the Bobcats and led the team on numerous scoring drives late for the win.

Freshman running back Owen Anderson shined as well for Bogue Chitto with a touchdown run of his own.

Bogue Chitto looks to keep its momentum going next week when the team hits the road to face Wesson on Sept. 1. Kickoff is set for 7 p.m.

Senior running back Tanner Waldrop was the star of the show for Enterprise in its 28-20 overtime win over Salem... read more