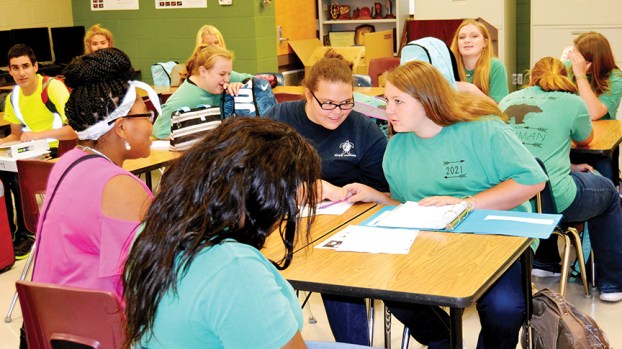 District- and school-level MAAP results can be found here.

Results from the Mississippi Academic Assessment Program released Thursday by the state Department of Education show students in the Brookhaven and Lincoln County school districts not only possess a general mastery of English and math at most schools, but in some cases surpassed the state’s average in those subjects.

Complete district- and school-level MAAP results for Brookhaven and Lincoln County school districts, Wesson Attendance Center and surrounding areas as well as all other schools in the state can be found at www.dailyleader.com.

MAAP is the new name for the Mississippi Assessment Program, which was first administered in the 2015-16 school year.

The MAAP assessments measure students’ progress toward academic goals that equip them with the skills and knowledge they need to succeed in jobs and college. Mississippi teachers helped develop the tests, which are aligned to the Mississippi College and Career Ready Standards.

MAAP tests have five levels. Students scoring at Level 4 or 5, the proficient or advanced categories, are meeting or exceeding grade-level expectations statewide. The scores suggest that students have a thorough understanding of grade-level content and are on the right track to being ready for college-level coursework.

Students scoring at Level 3 demonstrate a general mastery of the knowledge and skills required for success in the grade or course, and they are approaching expectations for that grade or course.

Students scoring a Level 1 or 2 need more assistance in learning the content and are in need of greater supports.

“You want 1 and 2 to go down and you want levels 3, 4 and 5 to climb. And that’s exactly what we’re doing,” said Brookhaven Schools Superintendent Ray Carlock. “We moved in a positive direction.”

Carlock said he is pleased with the numbers released by MDE and expects students to continually improve their scores in the two areas tested each May.

He said administrators have worked to make sure the curriculum covers what is on the tests and students are challenged to do their best.

“I think at the end of the year, we will see a big difference,” he said.

Lincoln County School Superintendent Mickey Myers said there is a sense of optimism in the district.

“We have professional educators in this district who will not settle for mediocrity,” he said. “I applaud them for their relentless efforts to educate our children in the midst of constant change.”

Overall, students statewide showed gains in both ELA and mathematics. The percentage of students meeting or exceeding grade—level expectations on ELA assessments increased from 32.6 percent in 2015-16 to 34.9 percent in 2016-17, and from 31.1 percent to 36.8 percent on mathematics assessments.

“Student achievement in Mississippi is steadily improving thanks to the hard work and focused efforts of teachers, administrators, parents and students,” said Carey Wright, state superintendent of education. “We have raised expectations for what students can accomplish, and our students are meeting and exceeding these higher expectations.”

Locally, the majority of students tested scored in Level 3, which shows they have a general mastery of the subjects.

In the Lincoln County School District, 40.9 percent of the 276 students taking the test scored in Level 4. Those were in Bogue Chitto (40.3 percent), West Lincoln (47 percent), and Loyd Star (40.5 percent). The majority of Enterprise students scored Level 3 with 37.3 percent of the students showing general mastery in English II. Only slightly less — 35.6 percent — scored Level 4, showing proficiency in the subject.

In Algrebra I, 31 percent of the 303 students in the Brookhaven School District scored Level 3.

At Brookhaven High School, 278 students took the Algebra I test and the majority — 38.5 percent, scored Level 2, while 32 percent scored Level 3. Additionally, some 25 percent of the students at Ole Brook scored either proficient or advanced in that subject.

In the Lincoln County School District, 46.6 percent of the 279 students taking the test scored in Level 3. Those were in Bogue Chitto (50.7 percent), Enterprise (41.2 percent), and Loyd Star (60.7 percent). Slightly more than 25 percent of West Lincoln students also scored Level 3, but the majority — 61.8 percent —showed they were proficient in the subject by reaching Level 4 in Algebra 1.Statewide, only 25.9 percent of the 43,436 students scored Level 4.

• Twenty-two districts had greater than 45 percent of all students scoring Level 4 or 5 in ELA, compared to 14 districts the previous year.

• Thirty-two districts had greater than 45 percent of all students scoring Level 4 or 5 in mathematics, compared to 15 districts the previous year.

The slight decreases in proficiency in fourth grade ELA (-1.3 percent) and English II (-1.2 percent) are due, in part, to significant increases in the number of students taking each test and the large proportion of students scoring at Level 2. Also, among the 3,132 additional students who took the English II assessment, 2,236 had taken the test in a previous school year and scored below proficient. The results of the MAAP assessments are closer to the results on the National Assessment of Educational Progress. MAAP raises the level of expectations for all students and provides parents a better picture of where their children are on their path to college or career.

While no single test can give a complete picture of achievement, annual assessments measure performance of meeting grade—level expectations and can provide important information about student progress and areas for improvement, especially when combined with student grades and teacher feedback.

“Student achievement is steadily rising across the state, which is the direct result of the great teaching and great learning that is taking place every day in Mississippi classrooms,” Wright said. “I am extremely proud of all of our students, teachers and school leaders for reaching higher levels of achievement.”

Structures are coming down. The Brookhaven Board of Aldermen Tuesday night at a public hearing approved a list of 27... read more