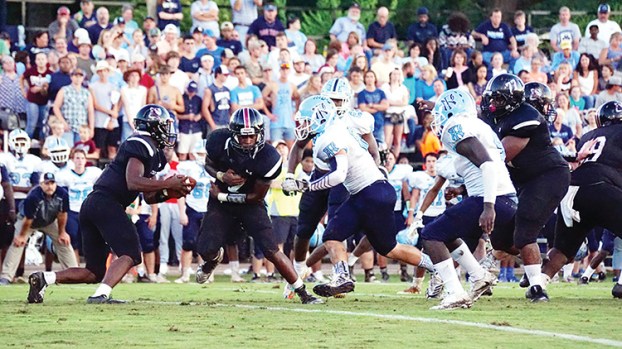 The Lawrence County Cougars had a tough night Thursday in their first game of the 2017 season. Facing the North Pike Jaguars, the Cougars’ home field advantage didn’t prove to be an advantage at all.

In the first quarter, North Pike’s sophomore quarterback Alijah Martin scored on a seven-yard rush at barely over three minutes into the game. The point after attempt was no good.

Coach Chris Smith’s Jaguars consistently moved the ball down field with a mixture of passing and rushing, which proved to work well against the Cougar defense.

Senior running back Malik Butler scored again for the Jaguars on a five-yard run, bringing their score up to 12. An attempted two-point conversion fell flat.

By halftime, Martin had racked up 98 yards passing and the Jaguars had 65 total rushing yards.

When the teams retreated to their respective locker rooms at the half, the score stood at 12-0.

The third quarter saw no points added to the board for either team, though North Pike intercepted a pass from Lawrence County’s junior quarterback Jerome Dudley.

In the fourth, with just over five minutes left on the play clock, Martin completed an 11-yard pass to senior wide receiver Dylan Adams who stepped in the end zone to add another six to the Jags’ total.

The two-point conversion was no good, and Lawrence County found themselves going into the last minutes of the game trailing by 18 points.

When the final buzzer sounded, Coach Jaymie Palmer’s Cougars had chalked up their first loss of the season — an 18-0 fall to North Pike.