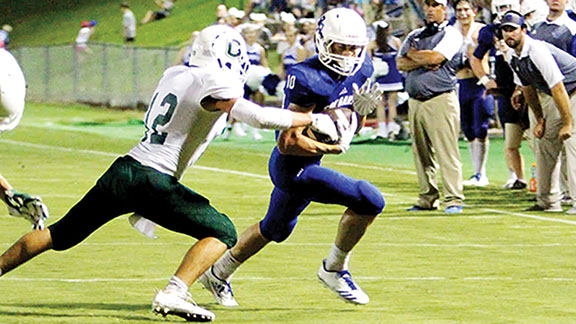 The Cougars drew first blood, putting a touchdown and extra point on the board. Just over midway through the first quarter, Logan Murray scored again for the Cougars, bringing their lead to 17-0.

By the time the clock hit 2:13 in the second quarter, Cathedral had come back from their two-TD deficit to lead the game 21-17 going into the half.

On the opening drive of the third quarter, Cathedral pushed to score once more. Then with a repeat drive soon thereafter, the Wave was rushing over the Cougars 35-17. BA’s Murray scored his second TD of the game from seven yards out, closing the gap a bit to 35-24. It was as close as they would get to redemption.

In the fourth quarter Cathedral tacked on another two touchdowns and PATs to end the game 49-24.

Coming off a record of 0-9 last season, and a 0-10 record the previous year, the Cougars are looking to change that this season under second-year head coach Ron Rushing. When they faced Cathedral in the 2016 season, they fell 34-20, but both that score and the box score for Friday’s game were far above their defeat to the Green Wave in 2015 when they only scored once against the seven repeat touchdowns from the Natchez team.

The Cougars have only up to go for the rest of the 2017 season.