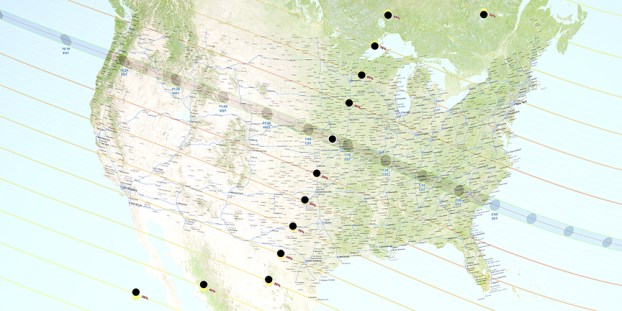 NASA photo/This map of the United States shows the path of the moon’s umbral shadow — the path of totality — during the total solar eclipse Monday, as well as the obscuration — the fraction of the sun’s area covered by the moon — in places outside the umbral path. The peak of the eclipse in Lincoln County can be seen about 1:26 p.m.

Eclipse takes us to the dark side

During Monday’s eclipse, many area schools will keep students inside with the blinds drawn, while the Mississippi Department of Transportation is warning motorists not to drive while wearing solar eclipse glasses.

And a Brookhaven optometrist is echoing the advice of other experts nationwide: Don’t look at the sun.

Lincoln Countians will get the chance to witness a rare celestial event Monday — a total solar eclipse, though in this part of the country it will be an almost total eclipse. The view from here will still show a sliver of the sun behind the full moon. Only 83 percent of the giant glowing orb will be blocked when viewed from Lincoln County, while those in the stretch from Salem, Oregon, to Charleston, South Carolina, will see the total eclipse.

Lincoln County Schools have cancelled outside activities for Monday during the eclipse as a safety measure. Most teachers will instead show the eclipse on NASA’s live stream inside the classroom so they can prevent a student from accidentally looking directly at the sun during the event.

Merrell said teachers have been asked to prepare lessons plans that will go along with the eclipse to let students “know what the event is and how rare it is to have something like this happen.”

The last time a total solar eclipse swept the whole width of the U.S. was in 1918. Partial eclipses are less rare, but still aren’t usually clearly viewed from this area.

“The last time I can remember one was when I was in the fifth grade,” Merrell said.

During the eclipse, the sun will be mostly blocked by the moon, which will cause it to look like dusk outside in the middle of the afternoon.

“It’s going to be neat for the younger kids to see how dark it will get,” he said.

Some teachers in the higher grades have purchased eclipse glasses for their classes and will be taking their students outside, he said.

Brookhaven School District will be doing something similar.

“To ensure the safety of our students, we will need to keep our elementary and junior high students — grades PreK-8 — inside the buildings during the eclipse hours of noon until the end of the usual normal school day, on Monday, Aug. 21,” the district wrote on its website. “Principals will limit movement after lunch to protect our students. No outside viewing of the eclipse is allowed without principal approval. Teachers will inform all students, grades PreK-12, about the eclipse and how looking at the sun without protective eye glasses can cause severe eye damage and blindness. Parents are encouraged to talk with their children about this event and the injuries that can result from looking directly at the sun without protective eye glasses. Some live streaming of the event will occur where facilities and technology are available.”

Amy Copeland and another science teacher at Brookhaven High School will be taking their Earth and space science classes of about 100 students outside.

“We will create the penhole paper projector and go outside, with parent permission,” she said. “And if they bring their own pair of approved glasses they can use them as well.”

Copeland said it’s important for students to participate in this rare event, either inside watching on a live stream or outside with safety equipment.

“The last time this occurred (a partial eclipse visible from Lincoln County) was in 1979 so for the students to get to experience this is an extraordinary event,” she said.

While the eclipse will be a historic happening, it’s also a safety concern for many parents.

“What everybody’s scared of is that the kids, even with the filtered glasses, will continue to stare at the sun,” said Dr. Chad Smith of Smith Eye Care.

The condition is called solar retinopathy, and it occurs when bright light from the sun floods the retina on the back of the eyeball.

“It gives you a blind spot in the center of your vision,” he said. “The damage is bad when it does happen. That’s why people are hesitant to let kids out. It would be hard to control them from looking up at the sun. That’s why an eclipse is so dangerous.”

Smith said solar eclipse glasses should be marked ISO 12312-2 to ensure they are safe to use for viewing the event.

The optometrist said that care should be used even with the glasses.

“It’s something you don’t want to miss, but just be safe with it,” he said. “Treat it as if you were looking at the regular sun.”

Regulation glasses are difficult to find in Lincoln County. Walmart sold out its three shipments quickly, and the Brookhaven Public Library gave out several hundred pair more than a week ago.

The Brookhaven-Lincoln County Chamber of Commerce will have some available for people to share at a Solar Eclipse Viewing Party Monday beginning at 11:50 a.m. at Railroad Park. The Chamber will provide tea and water. Participants are encouraged to bring a sack lunch and a blanket or chair.

MDOT offers the following travel tips for the day of the eclipse.

• Don’t stop along the interstate or park on the shoulder during the event.

• Exit the highway to safe location to view and/or photograph the eclipse.

• Turn your headlights on — do not rely on your automatic headlights when the eclipse blocks out the sun.

• Watch out for pedestrians along smaller roads. People may be randomly parking and walking alongside the roadside in the hours around the eclipse to get the best view.

• Prepare for extra congestion especially on the interstates in the path on the day before, day of and day after the eclipse.

• Avoid travel during the eclipse or in the area of the main path if you can.

For more information on the solar eclipse, its path and how to view it with proper safety glasses or other techniques, visit eclipse2017.nasa.gov.

City of Brookhaven sees its first West Nile case of 2017