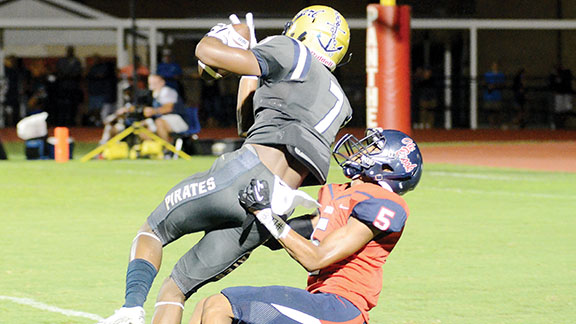 Playing with heavy hearts and a lot of fight Friday night, the Brookhaven Panthers just couldn’t slow down Pearl, falling in the season opener by a score of 23-3.

Brookhaven falls to 0-1 to start the season while the top-ranked Pirates advance to 1-0 on the young season.

It was an emotional start to the game for the Panthers as the school honored fallen teammate Jordan Blackwell.

With the No. 18 decal on every helmet and Blackwell’s jersey hanging on the sidelines, the Panthers were ready to fight against another 6A opponent.

Brookhaven head coach Tommy Clopton knew what he was getting into when scheduling two 6A opponents in Brandon and Pearl to start the season. He wanted his group to know where they stood right after the first game.

The Ole Brook defense played hard and the defensive line showed out by making numerous tackles in the backfield, but the speed of the Pirates proved to be too much.

Things started off well for the Panthers. On the second play from scrimmage, the Ole Brook defense came up with a big interception to give the offense good field position on their first possession.

Senior Tyler Mixon kicked a 23-yard field goal to give the Panthers the early 3-0 lead.

Those would be the only points of the game for the Brookhaven offense.

The Pearl offense, led by senior quarterback Jake Smithhart, quickly led a touchdown drive that lasted less than two minutes to give Pearl the 7-3 lead.

After Brookhaven junior quarterback Sevante Quinn threw an interception, Pearl used good field position to punch in another touchdown to increase its lead to 13-3.

The Panther defense held strong for the rest of the first half, as the game remained 13-3 Pearl heading into halftime.

The Panthers got the ball to start the second half and the offense put together a strong drive into Pearl territory. Senior running back Damarrell Leggett had the ball stripped from him inside the 20-yard line and Pearl jumped on the football to gain possession.

Smithhart led a long drive down the field for the Pirates, resulting in another field goal to increase their lead to 16-3 midway through the third quarter.

Toward the end of the third quarter, Smithhart connected with senior wide receiver Kendarius Evans on a 18-yard touchdown pass to increase the Pearl lead to 23-3.

The score would remain the same as the Brookhaven Panthers fell to 6A power Pearl 23-3.

The offense struggled at times with miscues and turnovers, but the Panther defense came up big and kept the team in the ballgame until the fourth quarter.

Facing two 6A opponents was a tall task at hand to open up the 2017 football season, but after the first two games, the team knows they can compete with anyone in the state.

In the end, Pearl proved to be the more talented team and they showed out at King Field.

Next up for Brookhaven is a road tilt at Lawrence County Friday. Kickoff is set for 7 p.m.

After an eventful night of football Thursday, Friday night lights in Lincoln and Copiah counties kicks off with five home... read more