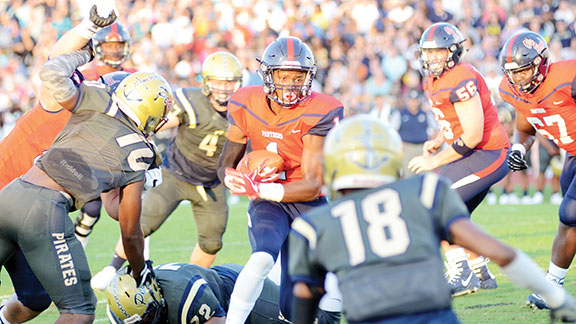 Senior running back Damarrell Leggett of Brookhaven (1) runs through the Pearl defense in their 23-3 loss Friday night at King Field. (Photo by Dylan Rubino)

What we learned from week one

Week one is officially in the books for the 2017 high school football season in Mississippi.

Out of the eight local teams, only three teams opened up the season with a victory. That list includes Bogue Chitto, Enterprise and Wesson.

Brookhaven put up a good fight against the Pearl Pirates, the top-ranked team in the state, but couldn’t keep up with their speed on offense as the Panthers fell 23-3.

Loyd Star, West Lincoln and Brookhaven all had leads in the first half, but couldn’t hang on and fell to 0-1 on the young season.

Here’s what we learned from the opening week of football.

The Brookhaven Panthers couldn’t score in their scrimmage against Brandon and Friday night against Pearl wasn’t much better on offense.

The Panther defense played their tails off in their loss to the Pirates Friday night and the unit proved they could hang with any offense in the state.

However, the offense struggled immensely in keeping drives alive and the passing game struggled as well.

Junior starting quarterback Sevante Quinn got benched towards the end of the third quarter after going 4-9 passing for 27 yards and one interception. Sophomore Byrion Robinson came in to replace Quinn and did not attempt a pass.

The ground attack totaled 127 yards on 33 carries, led by JQ Edwards and Damarrell Leggett at the running back position. The offense as a whole only had 154 total yards.

If the Panthers want to be contenders in the 5A title race, the offense will have to show drastic improvement and that starts Friday night on the road against Lawrence County.

Wesson offense can be scary good

Led by senior Dale Thigpen at quarterback, the Wesson offense has a new dimension with a true running threat behind center.

Thigpen rushed for 69 yards on 14 carries and one touchdown. Thigpen also went 7-for-10 passing with 29 yards, one touchdown and two interceptions.

Thigpen wasn’t the star of the show for the Cobras. Junior JaQuavion Harris with 150 yards and one touchdown, including a 96-yard score, led the Wesson ground game. The rushing offense totaled 238 yards in their 32-12 opening win over Crystal Springs at Copiah-Lincoln Community College Friday night.

If Thigpen can be a more compete passer and the Cobra defense can continue this strong start, look out for Wesson.

One team came out on the winning end in a tight contest Friday night and the other didn’t.

West Lincoln came out on the losing end 26-20 against Mount Olive and had a chance to tie or take the lead towards the end of the game.

Senior Chase Owen had a great game for the Bears Friday night with a passing, rushing and receiving touchdown all in one game.

Owen was a big part of their offense and kept West Lincoln in the game until the very end. Owen also had 11 total tackles on defense, including a team-high three tackles for a loss.

Who else can step up on West Lincoln besides Owen? Senior Julian Anderson, Ledarrius Jones, Gabe Nations and junior Matthew Case stepped up Friday night, but they’ll need to do more in the future.

Senior Tanner Waldrop shined on offense and came with the tying touchdown and the go-ahead score in overtime to give Enterprise the victory.

Both teams showed a lot of resilience in their opening games. It’s just unfortunate both teams couldn’t come up with victories.

Both Brookhaven Academy and Loyd Star held leads in the first half, but couldn’t hang on and fell to open the 2017 season.

With a completely new roster, Brookhaven Academy was expected to go through a transition period and that showed Friday night against Cathedral after giving up a 17-0 lead.

The Hornets held a 14-7 lead midway through the second quarter, but couldn’t score the rest of the game and the defense gave up some big plays to a strong Sacred Heart offense.

Loyd Star has a good opportunity to get back on track Friday night when they hit the road to face McLaurin, who fell to Bogue Chitto to open the season 42-26.