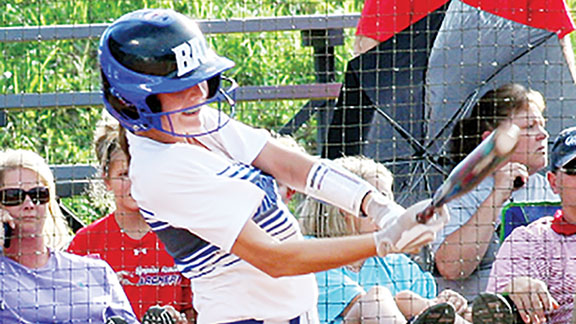 The win moves Brookhaven Academy to 7-5-1 overall on the season, as the team is 3-0-1 in their last four games.

“It was our first district win of the season,” Brookhaven Academy head coach Becky Flowers said. “It’s a big deal because in essence, this is where our season really begins.”

After pitching two straight shutouts, Smith stepped up to the mound and once again threw up a zero, throwing all four innings and gave up no runs on one hit, two walks and six strikeouts.

The Lady Cougars got on the board early and never looked back as the offense continued their dominant ways.

Madison Moak got the scoring started in the bottom of the first inning with an RBI groundout to make it 1-0 Brookhaven Academy.

The scoring wouldn’t end there as Brookhaven Academy added to their lead in the bottom of the third with six more runs. After a bases- loaded walk and a two-RBI single by Moak, Jordan stepped up to the plate and crushed a three-run homer to center field to extend the Lady Cougars’ lead to 12-0.

Smith cruised in the final inning and Brookhaven Academy got the easy win over their district opponent by a score of 12-0.

The only hit that Smith gave up in the game came in the top of the fourth inning on a single to the first batter in the half inning.

Smith has been stellar on the mound for the Lady Cougars and she doesn’t look to be slowing down any time soon.

Next up for Brookhaven Academy is a home game Monday against Newton County Academy. Junior varsity first pitch is set for 5 p.m. and varsity is set for 6:30 p.m.

Brookhaven Academy’s game Tuesday night against Sylva Bay Academy was cancelled due to a death in the Sylva Bay softball family.

It was an interesting week of football for the four county schools within Lincoln County. The Bogue Chitto Bobcats picked... read more