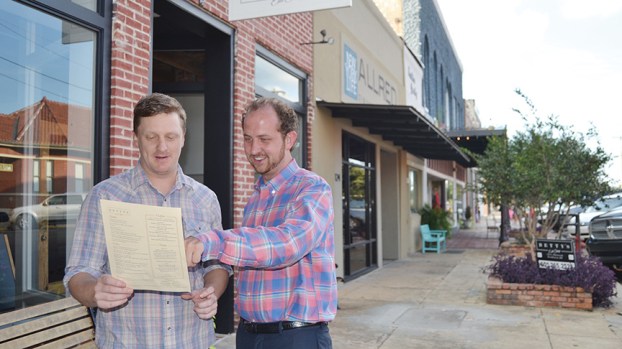 Photo by Donna Campbell/Matt Fitzsimmons, chef and owner of Betty’s Eat Shop, goes over a menu with Ward 4 Alderman Jason Snider Tuesday. Members of the Mississippi Economic Council’s Leadership Mississippi Class of 2017 will be in Brookhaven Thursday and Friday to see what the area has to offer, which includes Betty’s for a reception in their honor. Snider is a member of the leadership class, which will be meeting in Brookhaven for the first time since the program started in 1974.

Brookhaven will play host for the first time to a leadership conference to be held here Thursday and Friday.

The Mississippi Economic Council is bringing members of its Leadership Mississippi Class of 2017 to the Home Seekers Paradise for two days of meetings and fun.

Participants travel across the state about six times a year, learning about the great things Mississippi has to offer, and experiencing the issues that influence the growth and future of the state. Class members are exposed to multiple communities and cultures, creating an exclusive bond of fellowship and networking along the way.

Brookhaven’s Ward 4 Alderman Jason Snider is a member of the class this year.

Since being selected for the class, Snider has grown both personally and professionally, he said.

The class has visited several locations already including Camp Shelby and the Gulf Coast. Snider said it’s interesting to see how other cities are thriving. He’s looking forward to showing his classmates his hometown.

“We’re excited to bring people to Brookhaven and showcase what the city has to offer,” he said.

MEC’s Leadership Mississippi program has been developing, strengthening and connecting emerging leaders in and around Mississippi for over four decades. It is the second-oldest statewide leadership program in the nation.

Since its inception in 1974, Leadership Mississippi has graduated more than 1,400 alumni active in Mississippi business and politics.

Snider is thrilled to be part of the first class in the MEC Leadership program to make a stop in Brookhaven.

“It’s a unique opportunity to show off my city to business leaders from across the state,” he said.

The class of about 55 people will arrive in Brookhaven Thursday morning for a training session with Sam Jones, vice president of student affairs for Jones County Junior College.

That will be followed by a walking tour of downtown Brookhaven and a tour of artist and sculptor J. Kim Sessums’ studio.

Though he maintains a thriving medical practice, Sessums also holds a parallel career in the fine arts, with numerous works on display throughout the state. Among the most notable are a 6-foot statue of University of Mississippi football coach Johnny Vaught on the campus of Ole Miss and an African-American monument in the Vicksburg National Military Park as well as pieces depicting Mississippi authors Andrew Wyeth and Eudora Welty.

The night will be capped off with a reception at Betty’s Eat Shop with specialties prepared by chef and owner Matt Fitzsimmons. Class members will have a chance to network with alumni from past Leadership Mississippi classes including bankers Bill Sones Sr. and Shannon Aker and Lincoln County Engineer Ryan Holmes.

On Friday, participants will tour McLane Southern, a which provides groceries and food service supplies to convenience stores, mass merchants, drug stores and chain restaurants throughout the United States. McLane Southern was formed in 1986 when McLane Company Inc. merged with Southern Wholesale in Brookhaven. Since that time, it has grown to a 350,000-square-foot center located on 20-plus acres which employs approximately 500 workers.

The two-day class will end with lunch at Hurst Review. Started by Marlene Hurst in 1988, Hurst Review is a nationwide service which helps nursing students review the core content as well as critical thinking and application skills needed to pass the their rigorous NCLEX tests on a first attempt.

The Rowes by any other name would still have green thumbs. Mary and Harold Rowe work hard to keep their... read more