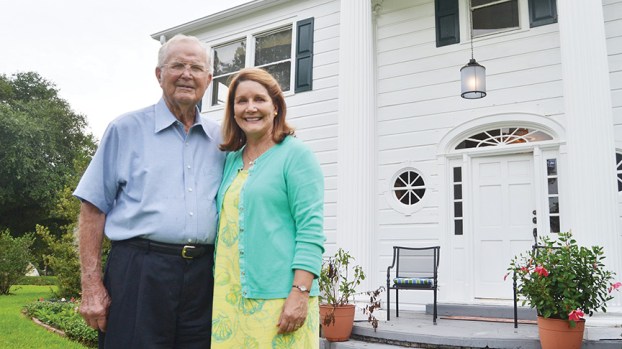 Photo by Donna Campbell/Retired nurseryman Frank Burns stands with daughter Jill Logan last year in front of the house Burns built in the late ‘40s. Logan would like to see her childhood home become an events venue and lodging for overnight guests to Brookhaven.

Two property owners in Brookhaven are asking the city planning commission to reconsider their zoning ordinances.

Tonight, at the Lincoln County Government Complex, there will be a public hearing to determine whether these proposed new zoning regulations will be approved.

The owners of the old Brookhaven Nurseries, located on Hwy. 51 South, want to turn the house into a lodging and event venue similar to a bed and breakfast, but without the breakfast.

The house was built in the late 1940s by Frank Burns, while he operated the nurseries on the property. Brookhaven Nurseries provided landscaping, trees, plants, bedding plants and flowers to Brookhaven, Lincoln County and florists nationwide.

Since Burns, who is in his early 90s, has moved into an assisted living facility, his daughter, Jill Logan, wants to get the property zoned from R-1 to R-3 so she can open the house up to the public for lodging and events.

“We don’t plan to have a full-fledged B&B,” Logan said. “Our plans are more of a guest house for local businesses bringing people in and families needing an extra bedroom or two for guests as well as an event venue.”

Additionally, Logan would like to offer short-term rentals for newcomers to the area who need a temporary home.

Logan hopes others will appreciate the fine workmanship and love that her father put into their home.

“We’re looking forward to the public hearing allowing us to move forward with a project for the home of Frank Burns,” Logan said.

The house is currently in the R-1 zone, which is a single-family residential zone. It needs to be moved to an R-3 zone for Logan to complete her plans.

“R-3 zones are considered multi-family zones, where you can have apartment complexes and things of that nature, in this case a bed and breakfast,” said Building Inspector David Fearn.

The other property that is up for re-zoning consideration is located at 2240 Brignall Road.

According to Fearn, it was an old gas station/country store. The building currently doesn’t have a roof, but the new owner recently resurfaced the floor and is waiting to put a roof on it, he said.

The owner hopes to finish renovating the building soon and teach CPR classes there.

“It’s an R-2 zone, which means it’s a two-family residential zone. It would have to be switched to a C-2 zone,” said Fearn. “A C-2 zone is for small to medium-sized businesses.”

The property wasn’t inside the city limits until 2007, when the city annexed several surrounding areas.

“Businesses that were previously not in the city limits were grandfathered in. They are covered under whatever they were doing before. When they brought in additional areas, they made most of it residential. In this case, the building we are talking about was empty and there hasn’t been anything in there for a long time, so it was made residential,” Fearn said.

MSA student: ‘We all have a passion for art’

Through her early teenage years, Hannah Arnold could see Mississippi School of the Arts nearby and wondered what it would... read more