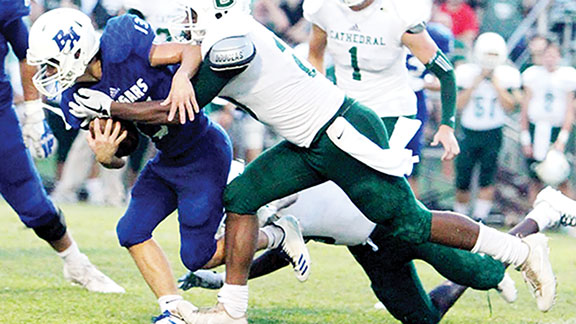 Justin Burt of BA (13) runs through a Cathedral defender in their 49-24 loss Friday night. (Photo by Sherylyn Evans)

The result was not what the Brookhaven Academy Cougars wanted Friday night in their 49-24 loss to Cathedral, but the team has changed for the better.

With an almost completely new roster with 35 players listed, Brookhaven Academy came out Friday night and showed a ton of fight, even in a loss.

The Cougars came out firing and scored the first 17 points of the ballgame and held a 17-0 lead against the Green Wave at the end of the first quarter.

That lead quickly dissipated and Cathedral scored the next 21 points of the game all in the second quarter and took a 21-17 lead at halftime.

Cathedral dominated the rest of the game, out-scoring Brookhaven Academy 28-7 in the second half, handing the Cougars the loss on opening night by a final of 49-24.

Brookhaven Academy head coach Ron Rushing would be the first to tell you that last season did not go as planned. The team finished 0-8 overall and had to forfeit their final two games of the season because they did not have enough players to play out the final two contests.

The main goal for Rushing was to recruit students from other sports to play football and he exceeded expectations.

A couple of players that played well for Rushing and Brookhaven Academy Friday night against Cathedral were juniors Dawson Flowers and Nick Ogden, and seniors Luke Jackson and Ethan Nations.

Flowers, Jackson and Nations are standout basketball players for the Cougars and Rushing knew they could make immediate impacts on the football team.

Flowers got the start at quarterback for the Cougars and went 11-of-26 passing for 180 yards and two interceptions. His longest completion of the night went for 50 yards and his play proved the BA passing attack could pose a threat.

For his first start at quarterback, Flowers did what he needed to do.

Jackson played a big role in the passing for Brookhaven Academy Friday night with a team-high five catches for 78 yards. Nations also chipped in with two catches for 20 yards. Jackson and Nations had six tackles each on defense.

Ogden was the standout player on defense for the Cougars, leading the unit with 11 total tackles Friday night.

Other new players that had big impacts on the game were juniors Justin Burt and Sonny Singh. On offense, Burt had five carries for 20 yards. Burt also chipped in on defense with five total tackles.

On offense, Singh rushed for 26 yards on two carries and had one tackle on defense. The biggest impact Singh had on the football team was on special teams, where the junior had 58 kick return yards.

The two returning players that made the biggest impact Friday night were junior Cade Brown and senior Logan Murray.

Brown had a team-high 82 receiving yards on four catches.

Murray played an important role on offense on Friday night with five carries for 27 yards and two touchdowns. The senior also made an impact on defense with a key interception and returned it for 31 yards down the field. Murray also recorded one solo tackle.

If Brookhaven Academy wants to get in the win column Friday, they’ll have to defeat a strong Trinity Episcopal Day School team that’s coming off a 22-14 opening win over the Amite School Center.

The Cougars will have to play better on both sides of the ball if they want to come away with an impressive road victory. Kickoff Friday night is set for 7 p.m.