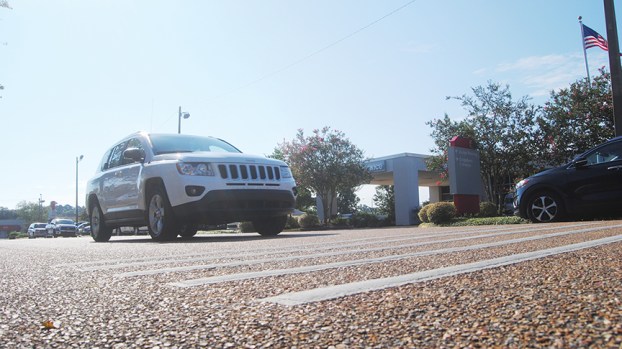 Photo by Matt Rushing/Rumble strips, like these in place on Big Lane Drive by King’s Daughters Medical Center, soon may be popping up in Brookhaven neighborhoods as a way to slow down speeding motorists.

City of Brookhaven may be ready to rumble with speeders

Rumble strips are coming to a neighborhood near you.

Brookhaven Police Chief Kenneth Collins addressed concerns of drivers speeding in neighborhoods to the city’s Board of Aldermen this week.

Collins called Attorney General Jim Hood’s office in Jackson for an opinion on whether speed bumps can be used to curb the problem.

“It’s up to the governing body,” Collins said. “It’s a safety issue and the municipality has the right to put speed bumps where they think they are needed.”

Collins advised the aldermen that they could place speed bumps anywhere on city roads that they deem necessary as a safety precaution.

“Obviously we wouldn’t put them on any major streets like the boulevard or Hwy. 51. They are going to be most helpful inside neighborhoods preceding a stop sign or somewhere in the middle of the street to keep the speeds broken down,” he said.

According to Public Works Director Keith Lewis, a set of speed bumps cost approximately $400. Originally, the city considered using its own equipment to grind strips out of the roads’ asphalt to save money. But that’s too permanent of a solution, Lewis said.

“Instead, what we’re going to do is go with rumble strips that we can put down on the streets because they are easy to take up if we have too,” he said.

A rumple strip is designed to create a strong vibration from the road surface, through the tires of the vehicle, and to the driver through the steering wheel. The sensation alerts the driver to lower speed to stop the vibration.

If they put down rumble strips, they can take them up and move them if they needed to and not damage the street.

“It will be something similar to those by the hospital,” Lewis said. “They will be mainly for streets in the neighborhoods.”

If individuals have concerns about motorists driving too fast in residential neighborhoods, they are encouraged to call the alderman for that ward or City Hall at 601-833-2362.