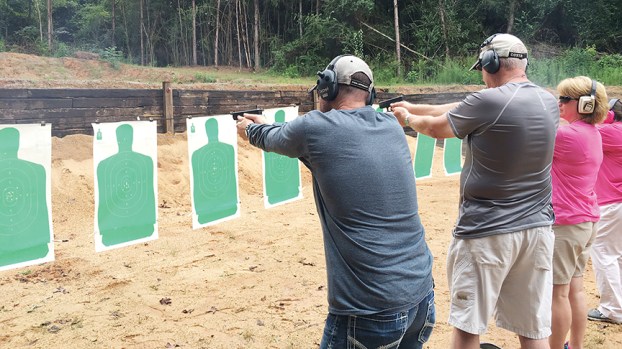 Photo submitted/Students at an enhanced carry firearms class held recently at Primos Hunting take aim at targets. Another class will be held Saturday.

A Brookhaven firearms instructor encourages anyone who plans to carry a weapon in public to be aware of the laws and requirements first.

“The whole purpose of the class is not only for you to be safe with the gun but also to have an understanding that would keep you from being in trouble,” he said.

While those who only want to carry a firearm in their home, on their property, in their car or in their own business don’t need to take the class, many others should.

Who exactly should take the class is someone of a misconception, he said.

Those who want to exercise their second amendment right to bear arms in a public place like a street aren’t necessarily required to receive certification, though Bairfield recommends it. However, many gun owners get confused on what’s public and what’s private.

“If you say, ‘I plan on putting this on my body, concealed, and I plan on wearing it wherever I go, then I would say, ‘Yes, you need the enhancement,’” he said.

Participants are required to bring a handgun of any caliber and 50 rounds of ammunition. They’ll also need ear plugs and either sunglasses or safety glasses, Bairfield said.

The eight-hour class is $100 and participants receive a certificate that day. Students will take their certificate to the Mississippi Highway Patrol to get a firearms permit sticker, he said.

Those who plan to take the class are encouraged to text or call Bairfield at 601-754-0087 if possible.

Anyone at least 16 years old can attend the class for the $100 fee, but the permit is only available to those 21 and older.

If individuals have already taken Bairfield’s class, there’s no additional charge to retake it, he said.

Classroom instruction is an important part of the process, he said.

For the first two hours, Bairfield explains basic gun rights for those without a permit and those who obtain a basic permit or enhanced permit and the laws regarding what a gun owner can and cannot do.

Then he’ll go over fundamentals like stance and trigger control followed by a few hours at the firing range.

Anthony Foster at Primos said the class teaches gun owners respect for their weapon and when the right time is to use it.

“There’s a lot of people who come through the class and say, ‘Oh yea, I got it because you never know. Nowadays you can get robbed in a convenience store or wherever. I want to be able to pull out my gun and defend us,’” Foster said. “That’s not what it was designed for. It’s designed for when your life is threatened yourself, not to go out and be a vigilante. You’ll end up a dead hero.”

Bairfield was a captain for the Lincoln County Sheriff’s Department prior to his election to public office in 2012. He’s has received training through several law enforcement academies and has been and NRA instructor since 1995.

“There’s a lot of factors in just getting the right training,” Foster said. “You wouldn’t put a kid in an 18-wheeler and send him out on the road. You don’t take a lady and give her a weapon she can’t handle and expect her to defend herself. If you’re not properly prepared and you don’t do this every day, you’re not going to know how to use it when it comes time. You’re going to panic.”

Foster believes proper training is good for all gun owners.

“Our theory behind all of this is protecting the rights to own but also protecting the people who do take the time to train to shoot and learn and are comfortable with it,” he said. “My kids have grown up shooting and they know the dangers of a gun. They have respect for it, they have a fear for it and they understand.”

Missing Monticello teen has been located, is safe

The Mississippi Bureau of Investigation has cancelled the endangered/missing child alert issued Monday for Justin Arthur Mackey of Monticello. He... read more