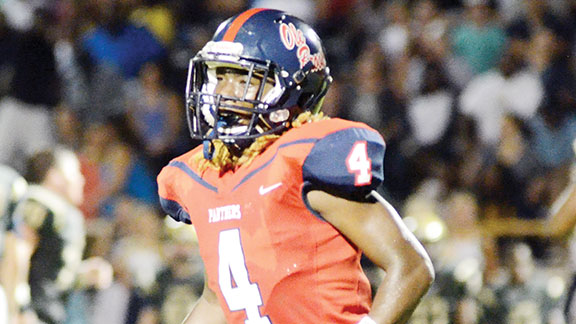 Isaiah Wall of Brookhaven comes up with a big turnover in Ole Brook’s 23-3 loss to Pearl last week. The Panthers face Lawrence County on the road tomorrow night. (Photo by Dylan Rubino)

After all eight local schools started their 2017 season at home last week, five of the schools play games on the road tonight for the first time this season.

The Brookhaven Panthers will look to bounce back after a tough home loss to Pearl on the road against rival Lawrence County.

Loyd Star, Wesson and West Lincoln all face tough challenges on the road against teams looking to get in the win column for the first time.

Brookhaven Academy showed a lot of fight last week in a loss, but they face a tough road challenge in trying to take down Trinity Episcopal.

It should be another eventful Friday night. Here’s what to look out for.

Who will bounce back in Monticello?

Both Brookhaven and Lawrence County enter week two of the season in unfamiliar territory, each starting 0-1.

The Panthers and the Cougars get the opportunity tonight to right the ship as the two rivals face off at Lawrence County.

The Cougars were shut out in week one against a strong North Pike team in a very physical game and fell by a score of 18-0.

The Brookhaven defense played well against 6A power Pearl, but in the end just couldn’t keep up with the team’s speed and fell 23-3.

Brookhaven proved in its two games against 6A opponents it can hang with anyone, but Ole Brook will need a better performance on offense if they want to defeat Lawrence County.

Look for both teams to play fast and physical while looking for that elusive first win. The rivalry between Brookhaven and Lawrence County is in store for another great game.

Which county school will step up?

Both Loyd Star and West Lincoln could not get a victory to open the season, but face good opportunities in week two.

Loyd Star hits the road to face the McLaurin Tigers, who fell to Bogue Chitto in week one.

The defense struggled last week in getting off the field against a good Sacred Heart team. If the defense can play better and the offense can find more production from players other than Patrick Price, the Hornets will be in good shape for a victory.

West Lincoln faces a Salem team that dropped a heartbreaker to Enterprise in overtime.

Senior Chase Owen did it all for the Bears in their loss to Mount Olive with a passing, rushing and receiving touchdown. The offense got significant contributions from Gabe Nations, Michael Brothern and quarterback Matthew Case.

West Lincoln can’t fall into an early hole tonight like it did against Mount Olive. If the Bears can get off to a good start, they should hang on for a victory.

After an exciting win to start the season, Enterprise faces a good Puckett team at home tonight.

Trailing 20-6 entering the fourth quarter against Salem, the Yellow Jackets rallied and scored 22 unanswered points to win in overtime.

Enterprise has a good chance at starting 2-0 with the experience on both sides of the football.

The Wesson defense looks improved and motivated after its rough stretch to end the 2016 season.

The Cobras held Crystal Springs to only 12 points and the offense took off for 238 rushing yards and two touchdowns.

Wesson faces a Sumrall team tonight that is coming off a 36-0 beat down at the hands of South Jones.

The Cobras fell to Sumrall last season by a score 41-35 after being tied at 21-21 at halftime. The Bobcats scored 20 points in the third quarter to run away with the victory.

Another complete performance can vault the Cobras to a 2-0 on the season with a matchup against Bogue Chitto coming next week.

The Copiah-Lincoln Community College baseball progam has scheduled the 2017 Fall Baseball League for Oct. 16-Nov. 9 and is open... read more