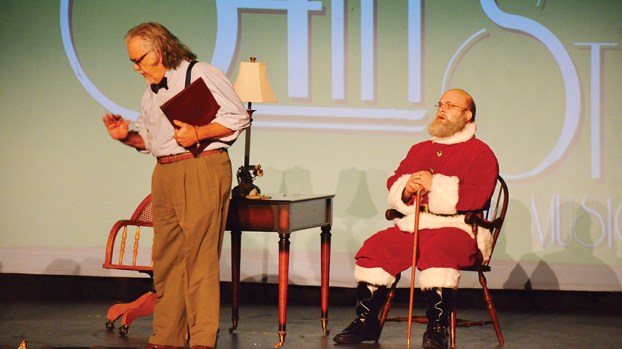 Photo by Eddie Cagle/Auditions for “Miracle on 34th Street: The Musical” are today and Monday at Brookhaven Little Theatre. Volunteers performed a scene from the show at The Haven earlier this month for the BLT’s 50th anniversary reveal party, but directors say all roles are open. Pictured are, from left: Shaw Furlow and Nick Bridge.

Another ‘Miracle’ comes to The Haven

Christmas miracles can happen on West Cherokee Street, too.

For Brookhaven Little Theatre’s Emily Waterloo, that would be to find the perfect cast for the upcoming “Miracle on 34th Street: The Musical.”

Waterloo, the executive director of BLT, believes that with the quality of actors in Lincoln County and the surrounding areas, she’ll see that happen.

“There is so much talent here,” she said.

Waterloo points out that those are stage ages rather than actual ages required of the actors.

They also need ensemble actors to be shoppers, children, government officials and townspeople. Several of the ensemble roles will include speaking parts.

“It could end up being about the size of ‘Mary Poppins,’” she said. “We want to encourage everyone to come and audition.”

It’s a musical so strong vocals and some dance experience is a plus, she said.

“Miracle on 34th Street: The Musical” is Valentine Davies’ story of a mall Santa who claims to be the real St. Nick. He is arrested and institutionalized for his crime, prompting a noble lawyer and a young girl to rush to his side to help prove his innocence and more importantly, his true identity.

Everyone who wants to be cast must participate in the closed audition, Waterloo said. Actors will read from a script and sing a prepared song, either a capella or with accompaniment track on a CD or electronic devise.

Those selected can expect weekly rehearsals.

“It’s definitely a commitment,” she said. “We hope to have a great turnout.”

“Maybe in late November,” she said.

The newly-elected alderman for Ward 2 would like to see city workers get cost-of-living raises and a community center swimming... read more