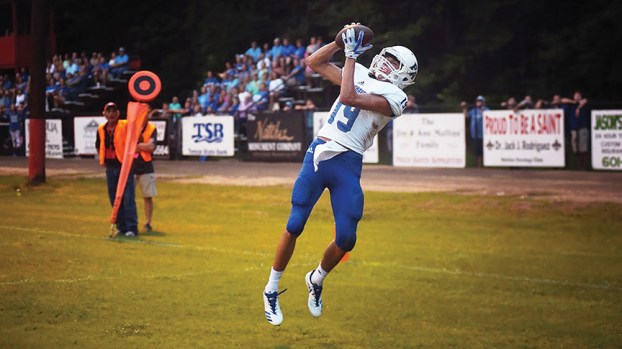 Cade Brown of BA (19) makes the TD catch in their 41-40 win over Trinity Episcopal Friday night. (Photo by Nicole Hester of The Natchez Democrat)

The Brookhaven Academy Cougars have climbed out of the pit with a victory over Trinity Episcopal.

Coming off a losing streak of 24 games, Friday night was the night the Cougars killed it. It was Rushing’s first win at BA.

The game started with the 0-1 Cougars and 1-0 Saints fighting hard against each other. Trinity drew first blood after converting a long third down play and tacking on a two-point conversion with 4:57 left in the first quarter. Before long, Trinity added another touchdown to rise to a 14-0 lead.

Cougar quarterback Dawson Flowers completed a 20-yard pass to wide receiver Cade Brown to get the Academy on the board. Kicker Corey Case was not able to recover from a bad snap and the point after attempt was no good. But the gap was closed somewhat to 14-6 at 9:04 in the second quarter.

Cougar Keegan Smith took the ball over 80 yards to score another TD, and Flowers completed to Brown to add a two-point conversion, tying the game at 14 with 6:33 left in the half. With only nine seconds left on the clock, Trinity punched in another TD and added their own two-point conversion to lead 22-14 going into halftime.

When the third quarter got underway, Flowers completed a TD pass and two-point add-on to fullback Ethan Nations, tying the game again at 22. Brown scored next for the Cougars and gained their first lead of the night. Wide receiver Tate Felder was the next to score, returning the ball 50 yards for a TD. Cougars led 35-28.

Trinity came back quickly at the end of the third and the first part of the fourth quarter to retake the lead at 40-35. Cougars fumbled and gave the Saints great field position with 5:57 left in the game.

But the Cougars got another shot without the Saints scoring, and Flowers took a keeper in from one yard out to lead again 41-40 with only 14 seconds left. And then the streak was over, as the clock emptied out on a Cougar victory 41-40.